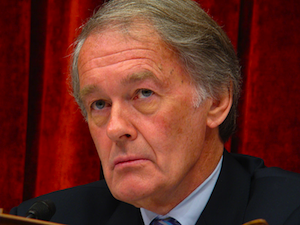 Congressman Ed Markey has been endorsed for the U.S. Senate by Environment Massachusetts.  It is a state-wide environmental advocacy group.

Markey is running in the Massachusetts Democrat primary against fellow Congressman Steve Lynch.  It is a race for John Kerry’s long-held seat that he left when he became Secretary of State in the Obama administration.

Markey represents the Massachusetts 5th congressional district.  He is an environmental progressive who has focused on energy policy. He serves on two energy committees and is the former chairman of the Select Committee on Energy Independence and Global Warming.

“Congressman Edward Markey is a principled environmental champion who has distinguished himself by successfully standing up to polluters and the powerful interests that put our environment and health at risk,” said Johanna Neuman, Regional Director for Environment Massachusetts.

She went on to say “Cleaner air and water, more energy-efficient cars and appliances, protections for our oceans and open spaces, and leadership in the fight to solve global warming are all the results of an astounding career of fighting for what is right and getting results.”

The primary will be April 25 while the special election is June 25.