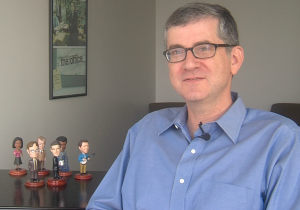 From the very beginning to the bitter end, Greg Daniels has done it all. He adapted the British hit “The Office” for American audiences.  Nine seasons later he wrote the last episode the show would ever air.

He enjoyed every minute of writing the finale, and didn’t get overwhelmed with the pressure of tying up so many loose ends.

“There was an awful lot of characters to wrap up and storylines to squeeze in,” he explained to WEBN in Los Angeles today. “On the one hand, it was easy because you knew you were ending all these people’s stories.”

Ending these stories meant bringing back familiar faces and old friends. “I was very happy to have the different cast members return like Mindy and BJ and Steve,” he said. “We used a lot of the writing staff as actors.”

He says Steve Carell’s cameo was the most important. His first line was one of his trademark “that’s what she said” jokes.

“It was such a classic thing to set up a situation where he could say that and the characters were acting like it was the most profound interaction that he could say,” Daniels explained. “It was just a ‘that’s what she said’ joke.”

Ending the nine-year show was bittersweet for Daniels. And in a way, so was being nominated. “I guess there’s somewhat mixed emotions to being nominated for the finale,” he said. “On the one hand, you’re like ‘is that a compliment, to possibly get an award for ending your show?’”

Daniels is up against big names like Tina Fey and Louis C.K. for Outstanding Writing for a Comedy Series.