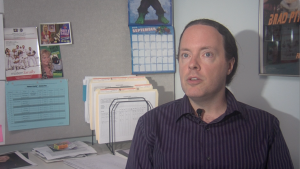 There’s more to acting than just reading lines.  And “Modern Family” Casting Associate Allen Hooper has proven that!  He has been working for the show since the beginning and sees casting is all about finding the perfect fit.

“Sometimes the director will have a prototype in mind of a bigger name actor who would be too busy doing films or something to actually do the role,” he explained to WEBN in Los Angeles. “But, it gives us an idea of what type of actor, what kind of essence or vibe they might have, and we’d go looking for other people who are similar.”

Sometimes, he says, they aren’t even looking for an actor at all. “We had to find a bagpipe player recently. And there aren’t many actors who can play the bagpipes, so what we’ll do is try to find bagpipe players who hopefully can act.”

But Hooper wasn’t always sitting on the casting couch. In fact, he started out on the other side of the audition process. His acting background has been a plus, getting him to relate to every aspiring actor he meets.

Five actors from “Modern Family” are nominated for awards this year. Hooper laughs about how many nominations the show consistently receives. “I always make the joke that it would be nice if all 6 of our male actors, including Rico Rodriguez and Nolan Gould were nominated and we could change it to Best Supporting Actor on ‘Modern Family.’”