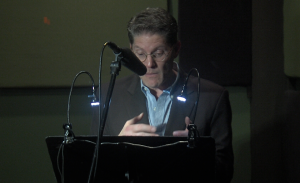 Bob Bergen didn’t dream of being an astronaut or an a baseball player. Instead, he wanted to be the voice of Porky the Pig.

“It’s very strange to tell your parents at five years old you want to be Porky Pig,” Bergen told WEBN.  “And my mom said you can’t be Porky Pig, you’re Jewish.  And I didn’t quite understand what that meant.”

That meant Bergen couldn’t eat pork but that didn’t matter to him.  He spent his childhood days watching cartoons.

“I’d be in the living room on Saturday morning watching cartoons and [my mom] would be in the kitchen,” said Bergen.  “She would hear a line from the television and then she would hear the line again.  She thought it was very strange the cartoon was repeating a line.  She came in and stood in the doorway watching me mimic the television.”

He figured out the formula to Porky’s stutter by taping and memorizing cartoons.  He even practiced at school.

“Teachers would ask me questions and I would answer like Porky the pig,” said Bergen.  “I would get sent to the principal’s office, but I didn’t care. I wanted to be Porky the Pig.  It was a passion.”

This passion was more than a hobby.  Bergen was driven to become the voice behind this iconic pig.  In fact, when his family moved to Los Angeles, fourteen year-old Bergen sought advice from the person who knew Porky best, Mel Blanc, who played the voice until 1989.

“I thought, I’m going to call Mel Blanc and tell him I’d arrived,” said Bergen.  “I’d seen him on television and he was not young.  I thought it was very generous of me to offer him a chance to retire.”

After searching through all the California phone books, Bergen finally found Blanc’s number and gave him a call.  But it wasn’t just Blanc who helped Bergen achieve his dream of becoming Porky.  He had the support of his parents, agents, and industry professionals.  So Bergen got to fulfill his voice-over dream.

“I know the character actually better than I know myself,” said Bergen.

Bergen’s performance of Porky got him an Emmy nomination for Outstanding Voice-Over Performance.