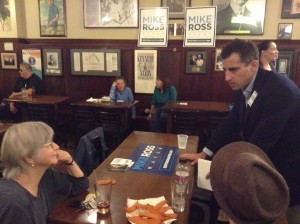 Boston mayoral candidate Mike Ross has his vision for the city.  And he wants everyone to know it.

Today Ross told more than 20 Jamaica Plain residents at Doyle’s Cafe that the city must plan before any action is taken.  They listened closely to his blueprint for providing better education for students, making neighborhoods in Boston safer and improving civic life.

“The American dream has to be available for all the people,” Ross said. “You have to believe that when you come to this country with absolutely nothing, you can still make it.”

Ross believes that his values come from his parents. His father Stephan is a holocaust survivor who escaped from 10 concentration camps.

“My dad taught me that we need to create a more justified and equal society,” Ross explained. “My mother is a 71-year-old openly gay woman. She taught me that we don’t judge people by how they look and who they love.”

Ross has been working as a city councilor for 14 years and President of Boston City Council for two years. Ross said that his law degree and MBA along with life lessons have taught him that leadership is all about standing up for what you believe in, especially when things are tough.

“But that’s not enough. It’s not enough to say I just voted against something,” Ross said. “You got to get it done and you have to at least try. We have to push people’s rights.”

“We start in the schools that need the most. We start with early education,” Ross said. “And then, we need technical and  vocational schools. I mean, we are not on a corn field. This is the City of Boston.”

“There are so many candidates. I think it’s very hard (to run for mayor),” Watkins said. “A lot of people are very strong and I think a lot are good to be the mayor. I was very impressed when I saw Ross being interviewed by WGBH.”

Watkins agreed with Ross that the public school system is an important issue in Boston.

On another hot button issue,  Ross blamed shrinking parking areas especially in Charlestown on a lack of planning.

Several years ago the Massachusetts State Ethics Commission found that Ross once used his power as a city councilor to have nearly three dozen parking tickets dismissed.

When asked if the scandal would negatively affect the election, Ross said it was an important learning lesson and made him a better person.