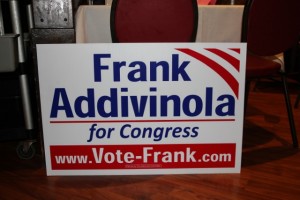 Frank Addivinola is the Republican choice for the Massachusetts 5th congressional district seat.

Tonight he defeated two other candidates soundly to move to the general election where he will face Democrat State Senator Katherine Clark.

After the polls closed, Addivinola’s family, friends and supporters gathered at a Woburn restaurant. Before the results came in, the overall feeling was relaxed but excited. Addivinola was enjoying food and conversation with everyone. When the news began pouring in from each polling station, the tension in the room started to rise.

Once it was official Addivinola thanked his wife Angelica and told WEBN how excited he was. “I feel fantastic. I am very fortunate that the voters came out to support me.”

This is not Addivinola’s first time running for elected office. In 2010 he ran for the State Senate and lost. He running on a platform of being new to politics and said if he wins he will leave after eight years in Congress.

Some of Addivinola’s major points included his private sector experience, remarking that the economy is the most important issue affecting the 5th district.

Although this is a victory, Addivinola said there are many obstacles ahead.

The general election will be December 10 to fill Edward Markey’s seat.  Earlier this year Markey had won John Kerry’s U.S. Senate seat which he vacated to become Secretary of State.