Katherine Clark is the winner.  Tonight she won the Democrat primary for the Massachusetts 5th congressional district.  After a long campaign against six other opponents, Clark pulled ahead capturing 31.6 percent of the vote. As the state senator expressed her gratitude to a room full of supporters inside the Melrose Knights of Columbus Hall, the seats of Congress showed clearly in her eyes. 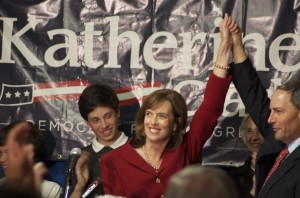 Dozens of volunteers were among the supporters celebrating. Annie Kirsch is a long-time volunteer in the Clark campaign. She expressed her admiration for the winner. Her appreciation for the state senator was evident as she beamed with pride when discussing all the effort she put into assisting with the crusade.

Cindy Starks is an activist in Arlington, a nearby town in the district.  She wore a hat with Clark’s smiling face plastered on it. Her personal anecdotes of just how genuine the politician was shed light upon the woman who just might head to Congress after the December 10th general election.

Perhaps an impassioned and confident speech given by Attorney General Martha Coakley will prove to be a good omen for Katherine Clark. Coakley introduced the winner Tuesday night with her very own words of compliment. The crowd roared in agreement. Coakley herself is running for governor.