There are problems with the 2020 Olympic Stadium.  It is supposed to be large and eco-friendly.  But now it is too costly so it has to be scaled down. British-Iraqi architect Zaha Hadid had designed the stadium to be built in Tokyo for the games.

The original plan included geothermal energy by using recycled rainwater to cool down the building. The plan also would have had grey water being reused for either the plumbing or the landscaping. 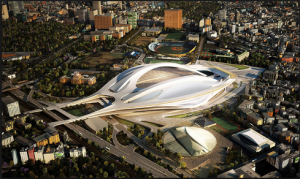 Earlier last year, plans for the ecological stadium had been approved for Tokyo even though the decision had not yet been made about the 2020 location. Then last September when Tokyo won the bid the logical assumption was that construction would go ahead with the stadium plan.  But Japanese architect Fumihiko Maki raised concerns that the design was too large for the urban area.

Then there is the cost factor. It was estimated to cost 300 billion yen ($3 billion) which officials say is too much. No details have been released how the design will be scaled down but those in charge claim the approved design concept will be kept.

Construction is expected to begin next year.