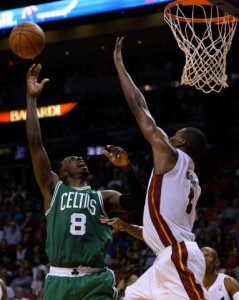 The buzzer sounded, the ball hit nothing but net, and the Celtics fans went crazy.

The score was 110-108 with 0.6 seconds remaining, Miami was up. Boston’s Gerald Wallace inbounded the ball in front of the Miami bench and made a cross court pass to Green. Green caught it and nailed a fadeaway three from the corner over the outstretched arms of LeBron James to end the game.

Green led the Celtics with 24 points while connecting on 8 of his 16 shots.

The Celtics refused to go away.

Miami’s biggest lead was 10, but Boston never gave in. The Heat led by as many as four points with 3.6 seconds remaining in the game, a near impossible deficit to overcome.

During a time out, Brad Stevens drew up a terrific play and his squad ended up winning its third-consecutive game.

Allowing Miami’s “Big Three” to score 63 points – including 21 in the final frame – is usually a recipe for disaster, but the Celtics’ offense matched Miami’s lethal attack on nearly every possession. Going into last night’s game, the Celtics’ offense averaged a mere 89.6 points per game. Tonight was the first time this season the Celtics cracked the century mark on the scoreboard.

The Celtics will look to win their fourth-straight game when they take on the Orlando Magic on Monday night.