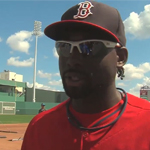 Jacoby Ellsbury is now a Yankee. Grady Sizemore’s ability to perform is questionable. That leaves a lot of pressure on rookie center fielder Jackie Bradley Jr.

But Bradley Jr. would be the first to disagree.

He says that he isn’t trying to replace the former Red Sox center fielder.

“I’m trying to do nothing. Just be myself. Just try to go out there and play the game, not worry about what happened last year. I mean, that’s in the past. This is now” said Bradley Jr.

Bradley Jr. entered training camp last year as the Red Sox’ second-rated prospect and got the opening day nod due to David Ortiz starting the season on the disabled list.

He struggled in his minimal appearances with the team throughout last season with a .189 average. Depending on how Sizemore fares, Bradley Jr. might see significantly more playing time in 2014.

He says even though he has another shot at the Red Sox roster, he’s not approaching this spring training any differently.

“Just doing the things I normally do.” Said Bradley Jr. “Working out during the offseason and coming to spring training ready to play some ball, getting the timing right, and getting ready for the season.”