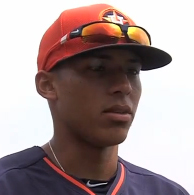 The Houston Astros are investing heavily into the future.

Houston enjoyed a brief period of success in the mid 2000s, but the team has recently fallen off. The Astros have not finished above .500 since 2008.

During that time, Houston has been building up the farm system. The Astros currently have 7 top-100 prospects, according to ESPN’s Keith Law.

Shortstop Carlos Correa ranks 4th on Law’s list and figures to play a significant role in the coming years. He was selected with the number 1 overall pick in the 2012 draft and later received a $4.8 million dollar signing bonus.

Correa, 19, and a native of Puerto Rico, spent last season with the Quad City River Bandits of the Midwest League. He hit .320 with 9-home-runs and stole 10 bases in 117 games. He received a non-roster invite to spring training with the Astros this season.

Correa said he wants to improve in 2014.

“I obviously want to have a good year,” Correa said. I work hard during the offseason, I try to stay consistent, work hard, and do my best.”

Despite the expectations that come with being the first overall pick in the draft, Correa said he’s keeping the game simple and wants to enjoy himself on the field.

“I’m just going out there trying to have fun, do my job, just play the game the right way, (and) play hard. That’s what it’s all about,” Correa said.

Astros manager Bo Porter has been impressed with the 19-year-old shortstop.

“The range that Correa has shown as shortstop, the arm strength, the heads up baseball, a lot of the things that may not show up in the stat sheet, we see them as coaches,” Porter said. “He’s much more mature than his age would probably tell you. He really understands what’s going on the baseball field and it shows in his actions.”

Correa said Astros second baseman and veteran leader Jose Altuve has had a good influence on him so far in spring training.

“The relationship with Altuve has been great,” Correa said. “He’s a great man. He helps a lot. He’s a great teammate. It’s great to have a guy like him in the clubhouse that can help everybody and knows a lot about the game.”

Although Correa will likely not see the Major Leagues this season, Houston certainly has a lot to be excited about in the coming years.