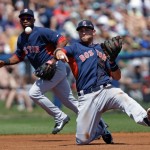 It’s time to move on.

The Boston Red Sox spent the better part of 30 minutes reminiscing about last year’s World Series Championship before the team’s home opener against the Milwaukee Brewers. Promptly after the ceremony, all thoughts were about the current season at hand, but it didn’t start off as the team hoped.

The Brewers scored four runs in the 9th inning to spoil the Sox’ home opener. Brewers’ first baseman Lyle Overbay opened up the scoring surge with a two-run double. Carlos Gomez followed that up with an RBI single to increase the lead the three. Two batters later, Aramis Rameriz drove in Gomez to push the lead to 6-2. Felix Rodriguez pitched a 1-2-3 ninth to seal the win for Milwaukee.

Jake Peavy got the start for Boston and pitched six innings of two run baseball. Edward Mujica surrendered the four runs in the ninth. Will Middlebrooks hit a solo home run in the third, but that’s just about all the offensive the Red Sox were able to muster up.

The Sox will play two more games against the Brewers before hosting the Rangers for a three-game series.