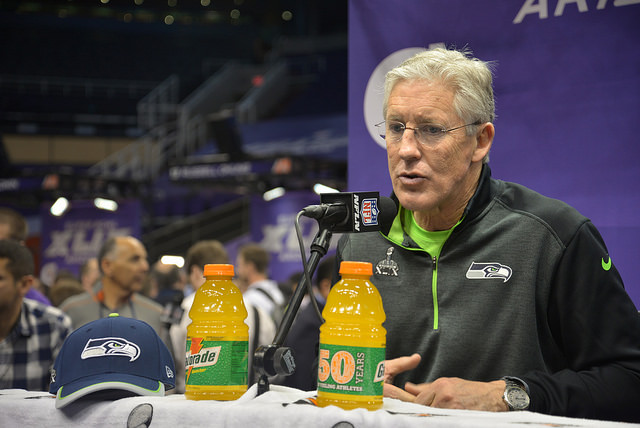 Seattle Seahawks running back Marshawn Lynch is one of the most  ridiculed players in the NFL.

Despite all the negative publicity Lynch receives, Seahawks coach Pete Carroll has nothing but kind words for his running back.

“I just know Marshawn is an extraordinary character,” Carroll said during his media day session with reporters Tuesday.  He is the most giving, the most loyal, one of the great teammates that you can work with on a team because of the way he takes care and looks after people.  He has a remarkable sense about that.  His sense for loyalty runs extraordinarily deep and his teammates know that.”

Lynch played in all 16 games this past season, rushing for 1,306 yards and a career high 13 touchdowns.  In the NFC Championship game against the Green Bay Packers, Lynch sparked Seattle with a 25-carry, 157-yard performance.

“I don’t feel like anyone compares to Marshawn,” Seahawks linebacker Bobby Wagner said.

Lynch is expected to once again play a major role for the Seattle in Sunday’s Super Bowl.