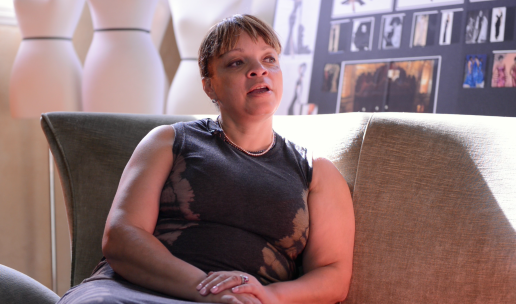 The March 1965 cover of Ebony Magazine featured a photo of Martin Luther King Jr. leading hundreds in the march to Montgomery. Ruth E. Carter, costume director for the Academy Award nominated film Selma used this cover to springboard her research and creative process for the movie.

Carter and her team worked quickly with a shoestring budget to find authentic pieces from the story’s time period – to breathe new life into these well-known legends. “We worked out a lot of deals, the Wester Costume a wardrobe in Los Angeles provided a majority of the costumes and we were able to pay them in one lump sum,” Carter tells WEBN.

The movie is based on actual events; however, Carter and Selam director Ava DuVernay took creative liberties when it came to dressing Carmen Ejogo who plays Coretta Scott King “the first lady of the civil rights movement.” Carter and DuVernay decided to dress Ejogo in a long beaded cream gown during the scene where King accepts his Nobel Prize. She had originally worn a simple dark suit with a matching black hat covered in feathers.

“Ava felt like we should dress her in something a little more opulent, we thought she would look a little unusual in that dark suit,” Carter tells WEBN. They found a “Jackie’o inspired beaded bodice which carter attached to full length skirt to create the piece.

Carter has become an expert at re-creating historic events. Working with Spike Lee on “Malcom X”, Lee Daniel on “Lee Daniel’s The Butler” and Steven Spielberg on “Amistad” she is helping to ensure black history is preserved. Carter says that the these films are important because it gives the audience a view at not just the facts but the mood of the events in an artistic way.

Carter will be honored at the Annual Essence Magazine Pre-Oscar Luncheon with  the Visionary Award for her contributions to the entertainment industry.