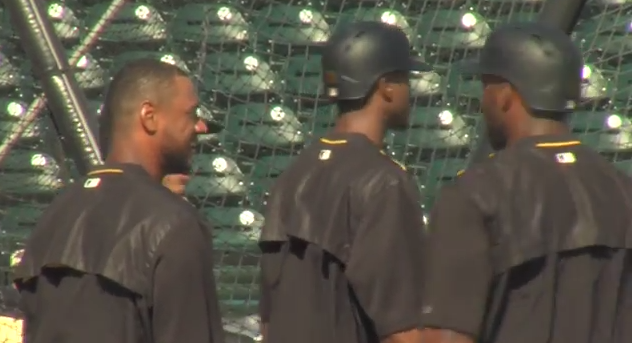 The playoff drought in Pittsburgh is over.

The Pirates have reached the National League playoffs in two consecutive seasons. 2013 was the team’s first postseason appearance since 1992, ending the longest in Major League Baseball.

The starting point of the Pirates resurgence is former NL Most Valuable Player Andrew McCutchen who is widely considered one of, if not the best center fielder in baseball. McCutchen isn’t the only threat in the Pirates lineup anymore. Right fielder Sterling Marte had a career high .291 batting average in 2014 and third baseman Josh Harrison is coming off a breakout season in which he finished 9th in the NL MVP voting. This trio atop the Pirates lineup has the team thinking more than just a playoff birth in 2015.

“We got a good group of guys and with each year comes experience,” Harrison told WEBN. “We’re coming into this season even more confident that we’ll be better than we have been the past two seasons.”

Pittsburgh also has an influx of young talent coming to the big leagues, highlighted by outfielders Gregory Polanco and Keon Broxton. These two say they’re taking in their surrounds and just being in the presence of some of the veterans in camp has been a valuable experience.

“Just seeing all the big leaguers play that I used to watch on TV, like Andrew McCutchen,” Broxton told WEBN. “Actually being on his team now, being his teammate, I’ve learned so much. It’s been the biggest highlight so far for me.”

Corey Hart is a 10-year MLB veteran, but 2015 will be his first season with the Pirates. He said getting adjusted to new teammates isn’t always easy, but it has been this spring.

“I’m loving my time down here. Enjoying it. Soaking it in. All the guys have been friendly to me,” he said. “These are a bunch of young guys, energetic. We’re all like family down here.”

The Pirates have to deal with the loss of Russell Martin this year, but the team hopes this mix of young guys and veterans will be enough to take them further than just the first round of the playoffs in 2015.