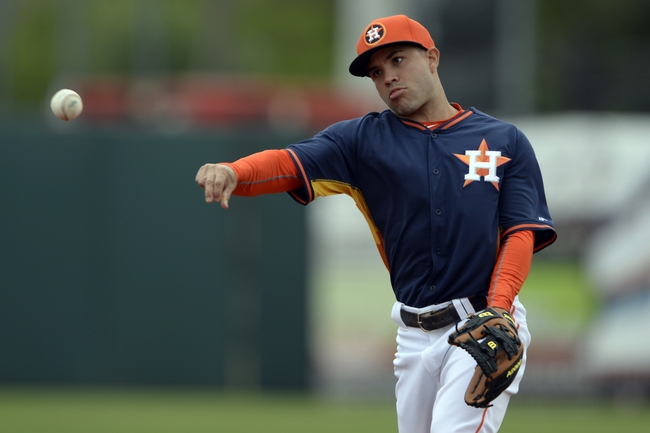 By Mike Lucas
3-13-15
ESPN.com lists Astros second baseman Jose Altuve at 5-foot-6, 165 pounds.When Houston is lined up for the national anthem before the game, Altuve is clearly the smallest player on the field and often it is not  even close. Don’t be fooled by his small stature though; Altuve is one of the best hitters in baseball.

The fourth year professional led the league in 2014 with a .341 batting average. He recorded 225 hits, 25 more than any other player in baseball. It was a career year for the Venezuela native, but his general manager thinks it’s only the beginning for him.

“[Altuve] has always beaten the odds from the day he came in for his first tryouts with us and we sent him home and he came back the next day,” Astros General Manager Jeffrey Luhnow tells WEBN.

Luhnow goes on to say that he’s fairly certain last year was not a career year for Altuve, and he’ll have some that are better.  “But that’s saying a lot, because he did a tremendous job last year,” says Luhnow.
Former Astros first baseman Jeff Bagwell was in camp with the team on Thursday to help give some of the younger players hitting advice. When asked about Altuve, Bagwell said he didn’t have much advice for him.“What can I say about Altuve? He just won a batting title. I’m fine with him,” he told WEBN.

Jose Altuve is just 24-years-old and he doesn’t appear ready to slow down anytime soon.