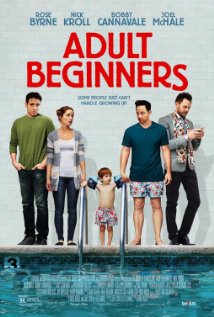 What do you get when you have Rose Byrne (Bridesmaides) and Nick Kroll (The Kroll Show) playing brother and sister? You get a heartfelt comedy like no other.

Adult Beginners stars Nick Kroll as Jake, a narcissistic entrepreneur who crashes and burns on the eve of his company’s big launch. Having had money lost and his entire life in shambles, he leaves the big city to move in with his estranged pregnant sister, Justine (Rose Byrne), brother-in-law Danny (Bobby Cannavale) and 3-year-old nephew in the suburbs- only to become their nanny. Kroll’s character slowly opens a Pandora’s box, learning things he for so long neglected when he was successful. Justine is in the process of selling their childhood home and her husband Danny (Cannavale) is having an affair.

Pieces of their past resurface when Jake and Justine take 3 year old Teddy to a swim class. The siblings never learned how to swim as kids, and the teacher recommends that they go in the adult beginners course. But, it turns out, that is not the only thing they are adult beginners in. The death of their mother still weighs heavily on the siblings’ relationship, forcing them to realize that they are still beginning at life, learning what it means to be an adult and parent in a world that is far from easy.

Unlike Kroll’s other works, he opens up this time and is able to show a more vulnerable side of the Jake character. He connects to moments that are funny and sad, but is still able to make them feel real, rather than forced. Byrne and Cannavale’s relationship is interesting and definitely not expected, but works for this quirky film. Byrne’s English poise shines through as Cannavale adds a classic New York feel to the modern day marriage. Their chemistry resembles one of a real life marriage with two people still trying to find their way in life. They are seen scarfing down family dinners, as if they haven’t seen food in months, and arguing about knowing the sex of their unborn child. They play the epitome of a millennial family.

The film follows an excellent course of progression, except for the beginning. This reviewer believes the film could have been more poignant, had it started slower and not rushed the beginning turmoil scene, but showed viewers the true Jack in all his “big shot” inventor glory. Kroll’s character was up and out of the city within the first five minutes, leaving viewers wondering a bit more about his successful persona.

Overall, the film’s heartfelt and hilarious humor carries through, making you want to cry and laugh all at the same time.