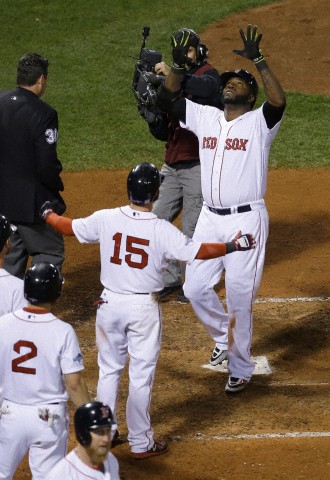 Big Papi announced in November that the 2016 season would be his final year with the Boston Red Sox.

Big Papi isn’t leaving his fans without a promise to make his last season a “monstrous” one. Ortiz took to Twitter this week to let it be known he is not going out without a fight.

“To my Red Sox fans you guys deserve better I’m getting ready for a monster season,” the tweet read. The Tweet, which had over 700 retweets and nearly two thousand favorites, was accompanied by a photograph of Ortiz at the gym.

After having three last-place finishes in the last four years, Big Papi is motivated to end 2016 victorious.

John Farrell, the Red Sox’s manager, is also hopeful that the team can give Ortiz his storybook ending. However, even with a positive attitude and a championship mindset he considers Ortiz’s retirement announcement “bittersweet.”

“It was a bittersweet moment because one, you look at a great player who’s able to exit the game on his own terms or at a time he chooses versus the opposite, and at the same time, you look at a guy who’s had a great career, you celebrate it, and you hope that 2016 is one of the strongest years of his career,” Farrell said.

Ortiz agrees that he is exceptionally lucky to be able leave the game on his own terms and is ready for the next phase of his life. Ortiz said following the 2016 season he plans to take a year off to spend time with his family and friends.

Don’t worry though Sox fans, Ortiz says Boston will be seeing plenty more of him long after his baseball career ends.

“I’ll be all over the place,” he said, “but I’m always going to have a place in Boston. You’ll see me around.”

After taking a year off, Ortiz plans to come back to Boston to take on a broadcasting or advisory role with the Red Sox.

For now though, Ortiz’s only focus is on bringing home a fourth and final championship.