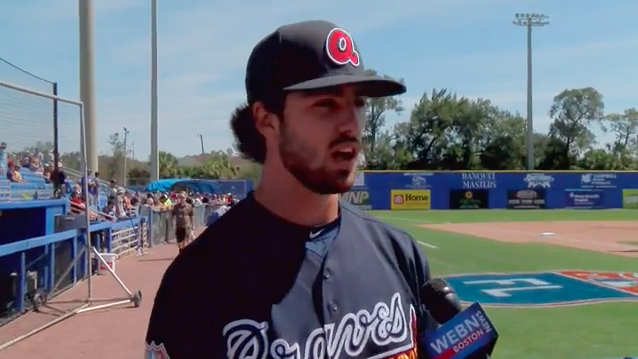 DUNEDIN, FL – The youth revolution is in full swing, and the Braves have their man in Dansby Swanson.

The 22-year-old shortstop was the number one overall draft pick in 2015 and is now wearing number 80 as a non-roster player for the Atlanta Braves.

“It’s cool to be able to play for the team you grew up watching,” Swanson said ahead of the Braves’ matchup against the Toronto Blue Jays on Monday. “Being from Marietta and being able to have your friends and family all close is pretty special.”

Swanson played in less than two-dozen games last year for the Arizona Diamondbacks but is ready to get more exposure and experience with his new club.

“Last year, I didn’t really get the whole taste, and I’m looking forward to a full year and seeing what everything has in store,” he said.

Fortunately for him, the Braves found themselves at the bottom of the National League East at the end of last season and are looking to rebuild and refresh the team by bringing in younger talent, including Swanson.

“I’ve worked with young clubs in the past and I’ve really, really enjoyed molding aspect and [putting] them in a position to maximize their potential, and you make adjustments along the way,” hitting coach Kevin Seitzer said about the team’s newest members.

Though Swanson admitted this Braves team is young, he said the teams more seasoned players shouldn’t be disregarded.

“They have some young pitching, but there are a lot of veteran players who are really, really good,” he said. “You’re able to just kind of learn from them every day. They take care of us and we just try and stick to what we’ve always been good at.”

Swanson will spend the next month fighting for his spot on Atlanta’s roster. For now, he’s enjoying the time at spring training while it lasts.

“The guys have been great and everyone’s been treating me really well,” he said. “It’s honestly just been a lot of fun. I love it.”