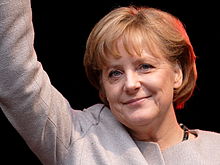 Angela Merkel is calling for a full face veil ban in Germany.  The German chancellor announced in a speech Tuesday at a Christian Democratic Union gathering that “The full veil is not appropriate here, it should be forbidden wherever that is legally possible.”

Merkel’s remarks come just weeks after the announcement that she plans to run for a fourth term, and the proposal is strikingly similar to those in place in France, Belgium and Switzerland.

This is not the first time the Islamic dress has been challenged in Germany; Interior Minister Thomas de Maiziere called for the veil to be restricted from public places in August. The German official said the veil “does not fit into our society,” echoing the sentiments of the French ban on religious swimwear in 2015. Cannes, the French Riviera famous for its annual film festival, announced a ban on the burkini following multiple terrorist attacks. Back in 2011, France became the first European country to ban the burqa, threatening a fine of 150 euros or public service duties if the full-body covering was worn in public.

Merkel says her 2017 run will be her toughest to date.  One reason is, her recent decision concerning opening Germany’s borders to migrants from war zones in the Middle East angered many voters. Should Merkel be re-elected, her position of power would be one of the only constants in the rapidly shifting European political climate. The European Union is experiencing tumultuous times following Brexit, the election of Donald Trump to the American presidency, and many populist movements arising across the continent.