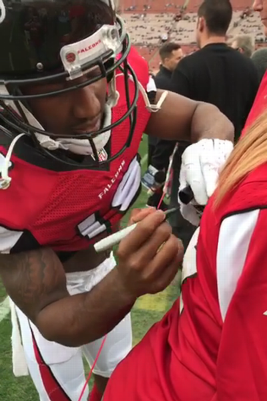 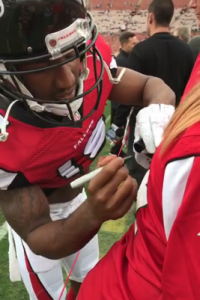 The sports world is no stranger to success stories, and the rise of Taylor Gabriel is one of them. Just after being waived by the Browns on September 3rd, the Atlanta Falcons immediately signed him the following day and has become one of their biggest weapons on an already lethal offense. The Cleveland Browns, on the other hand, have become the worst team in the NFL this season.

Playing a total of 39 games in Cleveland and only scoring one touchdown in that span, Gabriel has gone on to score 5 receiving touchdowns and one rushing touchdown in only 11 games played with his new team.
The impact of Gabriel’s play has been felt when throughout Atlanta.

This past matchup against the Los Angeles Rams, he saw Falcons fan Jessica Reyes wearing his jersey that she spent $150 on, as Gabriel’s jersey was not available in the team’s official pro shop near the stadium. Ecstatic and grateful Gabriel ran right over to sign the jersey and after the game talked to espn.com on how happy he was to see his jersey.

“I’m glad she did that, man,’” Gabriel said. “I’m glad to see that in the stands, and just the support from the fans. I would love to see more Taylor Gabriel jerseys.”

Gabriel also did Reyes another favor speaking in her friend’s phone on a live video making guarantees about his performance.

“That’s live,” Gabriel said to Reyes in a video captured by her friend, Sarina Martin. “Hopefully I can get two touchdowns for you today.”

Unfortunately, he wasn’t able to score two touchdowns but still made the experience for his fans unforgettable. Not only is Gabriel earning love from fans, he is also earning respect from his coaches like offensive coordinator Kyle Shanahan.

“He’s fearless,” Shanahan. “He’s not scared of anything. He’s a good blocker and obviously he can do screens and stuff like that, too. Anytime you have a receiver who can run the whole route tree, you can use him in a lot of different spots.”