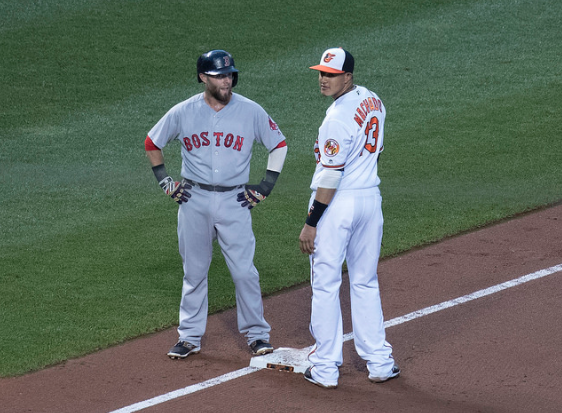 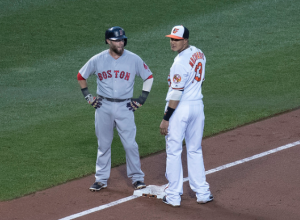 The current Red Sox home stand features games with the Yankees and the Cubs, but those aren’t the match-ups everyone is talking about.

Next Monday, the Baltimore Orioles are flocking to Fenway Park for a four-game series. Now, as division opponents, it’s fair to assume that there would be some healthy rivalry-feelings anyway. But for the Red Sox and Orioles, tensions are brewing to the brim.

Last Friday night, Orioles star third-baseman Manny Machado was on first base and tore off toward second, full-steam, trying to break up a double play. He hit the dirt with an aggressive slide, spikes up, and got tangled with Dustin Pedroia who dropped to the ground.

The Red Sox second baseman was instantly, visibly in pain, a sight that angered Red Sox players and fans for two reasons: Pedroia is beloved in Boston and Machado is not.

This is not the first time Machado’s play has raised the ire of his opponents.

In 2014, Machado hit A’s catcher Derek Norris in the head on a backswing which sparked a bench-clearing scrum. In the same series, he tossed a bat toward the mound and it wound up in the direction of Josh Donaldson, who is no fan of Machado, and the benches emptied again.

After this latest incident, Machado texted Pedroia that night and apologized. Pedroia took no offense, calling it a clean play. The whispers, still, were rising: is tomorrow’s game going to be a bean-ball match?

Immediately, the Orioles were on the attack. Barnes apologized and said he would “never intentionally throw at somebody’s head,” intention is being called out anyway.

Orioles manager Buck Showalter brought God into it, and said whether or not Barnes meant to strike Machado in the head is “between Barnes and the Lord.”

Said O’s pitcher Kevin Gausman, “That’s the wrong way to do it. You can kill a guy doing that.”

Pedroia tried to calm the storminess on both sides by calling it a “mishandled situation” after shouting to Machado across dugouts “that’s not me, it’s them”, likely referring to Barnes.

O’s reliever Zach Britton responded angrily, telling BaltimoreBaseball.com, “He’s the leader of that clubhouse and if he can’t control his own teammates, then there’s a bigger issue over there.”

The teams play again on Monday, perhaps time will tame the rage within. But just in case there are some fireworks, ESPN added the first game of the series to their broadcast lineup, because bad blood always makes for good TV.