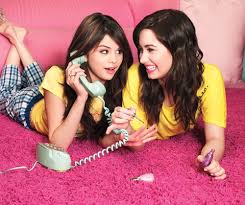 It’s safe to say the relationship between Selena Gomez and Demi Lovato has been “anything but ordinary.”

The two former Disney Channel divas reunited at the third-annual Instyle Awards on Monday. Gomez, who was dressed by stylist-to-the-stars Law Roach, wore a short black minidress. Lovato, on the other hand, opted to wear a long pastel purple gown and a matching belt.

The “Princess Protection Program” co-stars began their friendship years ago on the set of “Barney and Friends.” The two later got close during their time on Dinsey Channel when Lovato starred in “Camp Rock” and Gomez in “Wizards of Waverly Place.” In 2010, however, the starlets had a falling out, and have had ups and downs since.

After what—to many fans—seemed like an eternity of iciness between the former best friends, Lovato reached out on Twitter in July. “Loving your new song Fetish,” she tweeted at Gomez, “we’ve come a long way since our Barney days.”

Followers were delighted by Gomez and Lovato’s reunion in Los Angeles, which to many signified the official end of their almost seven-year-long feud.