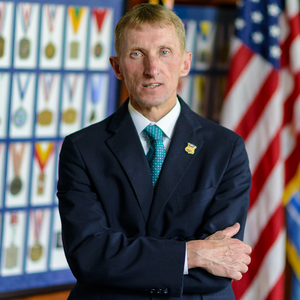 In an emotional announcement on Monday, 59-year-old Police Commissioner William Evans announced his retirement and welcomed William Gross as his replacement.

Evans has served for the Boston Police Department his entire career, 38 years, and on Monday, he announced that this year will be his last. To say that William Evans is a salt of the earth guy would be an understatement.  In his nearly four decade tenure, Evans climbed the ladder all the way to the top, and in 2013, he was named as the man to replace the now former BPD commissioner Ed Davis. Evans was instrumental in cases, such as the peaceful dispersion of the Occupy Boston protest, as well as the marathon bombing investigation, and the ensuing manhunt. When Evans officially steps down on August 4, he will move into a much lower pressure post as the head of campus security for Boston College.

A Message from Police Commissioner William B. Evans to the Members of the Boston Police Department https://t.co/2rce61oM9o

The man to take Evans place superintendent-in-chief  William Gross. Gross will become the BPD’s first ever African-American commissioner, and Gross certainly is well qualified for the job.

Like the man he is replacing, William Gross started from the bottom, in the BPD cadet program. For the past 33 years, Gross has overseen a number of districts in the Greater Boston area, and his commitment to serving the communities of Boston has certainly paid off. Five years ago Gross became the first African-American Police Chief in BPD history, and on Monday, he one upped himself, becoming the first African-American Police Commissioner in BPD history.