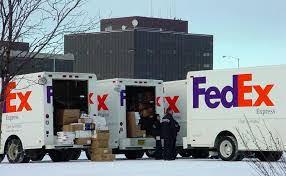 Captain Darren Gault from the East Moline Police Department said a coworker found the man’s body between two semi tractors around 9:30am.

It’s unknown how long he was there before being found, but police say there are no apparent signs of foul play. Authorities believe the weather is to blame for William Murphy’s death since temperatures in the region had dipped to minus 33 degrees.

Murphy was 69 years old. An autopsy is scheduled for Monday to determine the exact cause of his death.

FedEx has said, “We are working with local authorities as they investigate. FedEx has contingency plans in place to ensure the well-being of our team members and service providers. Several of our centers, including the Rock Island center, were closed or running very limited operations this week due to the extreme cold.”

So far 20 people have died in the United States from the week-long extreme weather conditions.