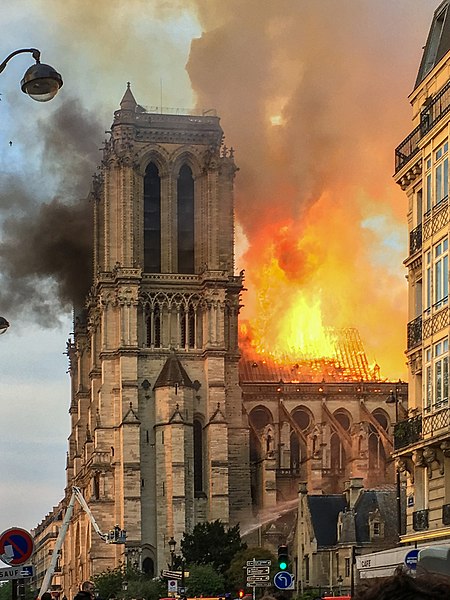 Paris watched from the streets as Notre Dame Cathedral burned. The 850-year-old church caught fire on Monday, April 15, and burned for nine hours as responders tried desperately to put out the flames. The cause of the fire is still unknown.

The flames started around 6:50 p.m (local time), near the 150-year-old spire. Construction work was being done in that area at the time, although it’s still unknown if this had anything to do with the fire breaking out.

The fire proved to be especially difficult to extinguish due to the complex architecture of the cathedral. The fire was fueled by the wooden roof structure, which is mostly surrounded by the stone that makes up the rest of the building. The stone made it difficult to get to the flames from the outside. It also worked to trap heat and smoke inside the building, making it difficult for firefighters to act from the inside. Furthermore, the tall height of the building made it difficult to extinguish from the ground. The height of the cathedral allowed more oxygen to fuel the fire. The heat from the fire made the air too thin for a helicopter to drop water from above, and planes travel too fast to drop water directly on the building.

Thanks to the efforts of 400 firefighters working over nine hours, large portions of the church managed to survive.

Although the iconic spire and the majority of the roof were lost to the flames, most of the cathedral survived. Both towers remain intact, as well as the famous stained-glass rose window and the Great Organ. Priceless relics were rescued from the flames, including the crown of thorns, believed to have been worn by Jesus Christ when he was crucified, and the tunic of St. Louis, believed to have been worn by King Louis IX in the 13th century.