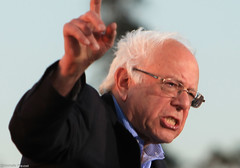 Presidential candidate Bernie Sanders released a plan on Monday to tax companies with extensive pay gaps between executives and workers, as a means to target income inequality, a primary focus of his campaign.

The income inequality tax would apply to all private and publicly held corporations with annual revenue of more than $100 million. It would raise an estimated $150 billion over the next ten years, according to a statement by the Sanders campaign.

“It is time to send a message to corporate America: If you do not end your greed and corruption, we will end it for you,” Sanders said, as he discussed the plan.