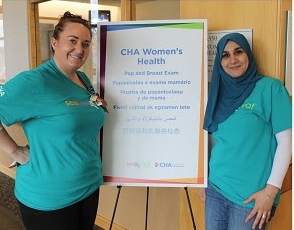 “See, Test & Treat” is a day-long event for low income Massachusetts residents to receive free breast cancer screenings, regardless of whether or not they have health insurance.

“If you have children, and you’re working two jobs, and you don’t have insurance, it’s so tough to get in for the screenings that you need,” said Sarah Primeau, CHA’s community relations project manager.  “Our job is really to help work with them, whether that be providing patient navigation, or reimbursing them for their transportation.”

Since 2009, the Massachusetts Department of Public Health has funded over 11 community health centers to help uninsured men and women across the state gain access to these screenings. Several of these health centers are a part of the Women’s Health Network, which specifically aims to provide healthcare access to patients in vulnerable populations in Massachusetts. Cambridge Health Alliance, funded partially by the Women’s Health Network grant, is one of the largest community health centers in the state, serving a diverse population of uninsured Massachusetts residents.

“We look at certain populations that we’ve found have more difficulty getting access,” said Susan Morrissey, CHA’s clinical nursing director. “Muslim women, black women, and we have a large population of Brazilians in our service areas, so a lot of our patients are Brazilian also.”

While breast cancer is one of the most common diagnoses in the state, the screening rate in Massachusetts for women aged 50 and older is 13% higher than the rate nationally, according to the Massachusetts Department of Public Health. While this is a good sign, there are still many barriers that people from low income populations have to navigate.

“We don’t just give them the appointment and say, ‘good luck,’” Morrissey said. “Today we sent an Uber gift card to a woman because she needs a biopsy done tomorrow, and she had no way to get there. So it’s a daily look at who’s in trouble, and what we can do to get these tests done.”

While CHA offers these screening services all year round, “See, Test, & Treat” is an annual opportunity for community outreach.

“Once a year we do a program where we’re out there trying to get people from the community in for these one day events, where we do all of these breast cancer and cervical cancer screenings,” Primeau said. “We provide childcare, we feed them a healthy meal, and we do it on a weekend, because a lot of people can’t come in during the week.”

According to the American Cancer Society, breast cancer that is found early is easier to treat successfully. They recommend that women ages 45-54 get screenings every year, via mammograms or clinical breast exams, and that “high risk” women get screened every year starting at age 30. At last year’s free screening event, instances of breast cancer were found in two patients, who were later able to get the tertiary care that they needed.

“I think a lot of our population are coming from other countries and are new to the United States, and they just don’t know based on their culture,” Primeau said. “If you can get screened early, your outcomes are far better.”