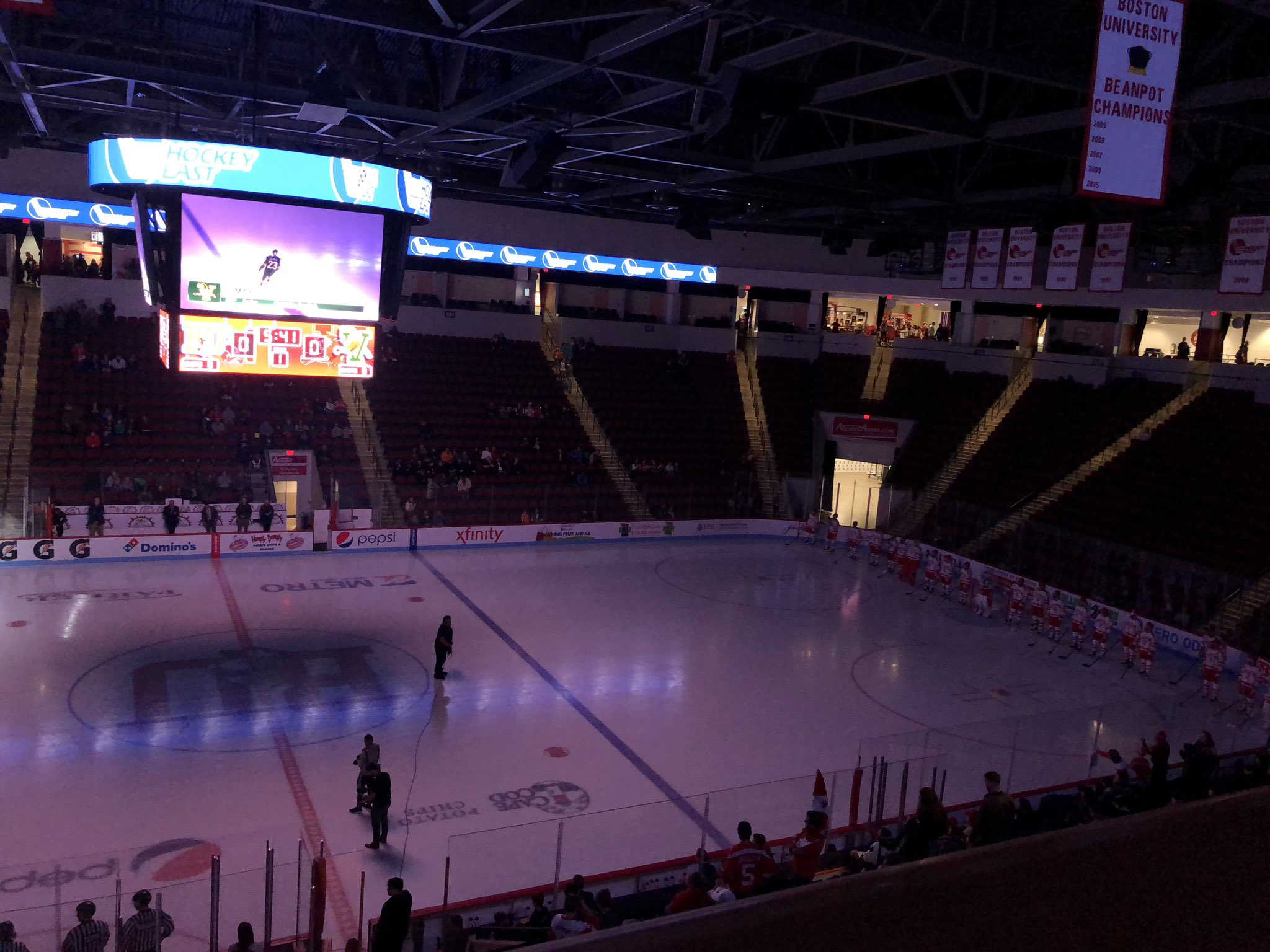 The final contest of a two-game homestand between the Boston University men’s hockey team and the University of Vermont ended in a 3-3 tie tonight at Agganis Arena.

“I thought we played hard,” BU head coach Albie O’Connell said after his first game back following a one-game suspension. “It’s just frustrating not getting that extra point.”

Turnovers and penalties haunted the Terriers (4-4-5, 3-3-4 Hockey East) once again throughout the game, allowing the struggling Catamounts (1-8-1, 0-5-1 Hockey East) to take advantage of their power play opportunities and BU’s defensive breakdowns.

The Terriers looked promising in the opening minutes of the first period. Just two minutes after puck drop, freshman center Sam Stevens slipped the puck underneath the pad of Vermont goaltender Stefanos Lekkas to give BU an early 1-0 lead and register his first collegiate goal.

Stevens, who played in just his second game of the season, replaced fellow freshman center Trevor Zegras on the first line tonight. Zegras received a major penalty and game misconduct in last night’s game for elbowing a Vermont defenseman in the head.

“[I was] a little bit nervous,” Stevens said about filling in for Zegras on the top line. “At the same time, I just got to focus and play my game.”

O’Connell praised the freshman’s performance after the game.

“He obviously jumped up a couple lines there and did a good job,” O’Connell said. “I thought his energy was pretty good for the first time he’s played hockey in a long time.”

The Terriers’ momentum and quality of play took a turn for the worst at the 8:58 mark of the opening frame. Senior forward Gabriel Chabot and junior defenseman Kasper Kotkansalo were each assessed major penalties and game misconducts within a minute of each other.

“We can’t have that in our game,” O’Connell said. “You can’t put yourself in a five-on-three situation for four minutes in a game; that could be game over very easy.”

With momentum carried into the second period and another power play awarded to them, senior center Derek Lodermeier found the back of the net to give the Catamounts a 2-1 lead at the 3:20 mark.

“He hadn’t scored yet this year,” Vermont head coach Kevin Sneddon said about Lodermeier. “It was great to get our captain on the board tonight.”

BU responded with a goal three minutes later as Stevens poked home his second goal of the game between Lekkas’ legs to tie the game at 2-2.

Freshman defenseman Domenick Fensore, who scored his first collegiate goal in yesterday’s 3-0 win over the Catamounts, recorded his send assist of the game on game-tying goal.

“[Fensore] was unbelievable all weekend,” O’Connell said. “He really skated well, he broke us out well, he added offense, he’s maturing from game to game, and he’s showing really good signs.”

Four minutes later, junior defenseman David Farrance netted his tenth goal of the season and seventh goal in six games to give the Terriers the lead on the man advantage.

“David is about as hot as I’ve ever seen a guy that I’ve been involved in coaching,” O’Connell said. “He’s really poised, really confident, and he’s got the ability to control the game. He’s playing on another level right now compared to the other guys, especially on the power play.”

The goal extended Farrance’s point streak to seven consecutive games. The junior leads Division I defensemen in goals and points, and he is tied as the leading scorer in the nation.

“Usually if you play hard defensively the offensive chances will come,” Farrance said in regards to the on-ice philosophy he credits his point streak to.

With 3:41 left in regulation, junior first-line center Alex Esposito lifted the puck over BU goaltender Sam Tucker’s glove after being left wide open on top of the crease and evened the score at 3-3.

The goal brought the game to overtime where both teams earned a point after a scoreless five-minute period.

BU will be back in action at Agganis Arena on Tuesday, Nov. 26 in a non-conference matchup against Sacred Heart University. Puck drop is set for 7 p.m.

O’Connell confirmed Zegras will return to the Terriers’ lineup for the game.