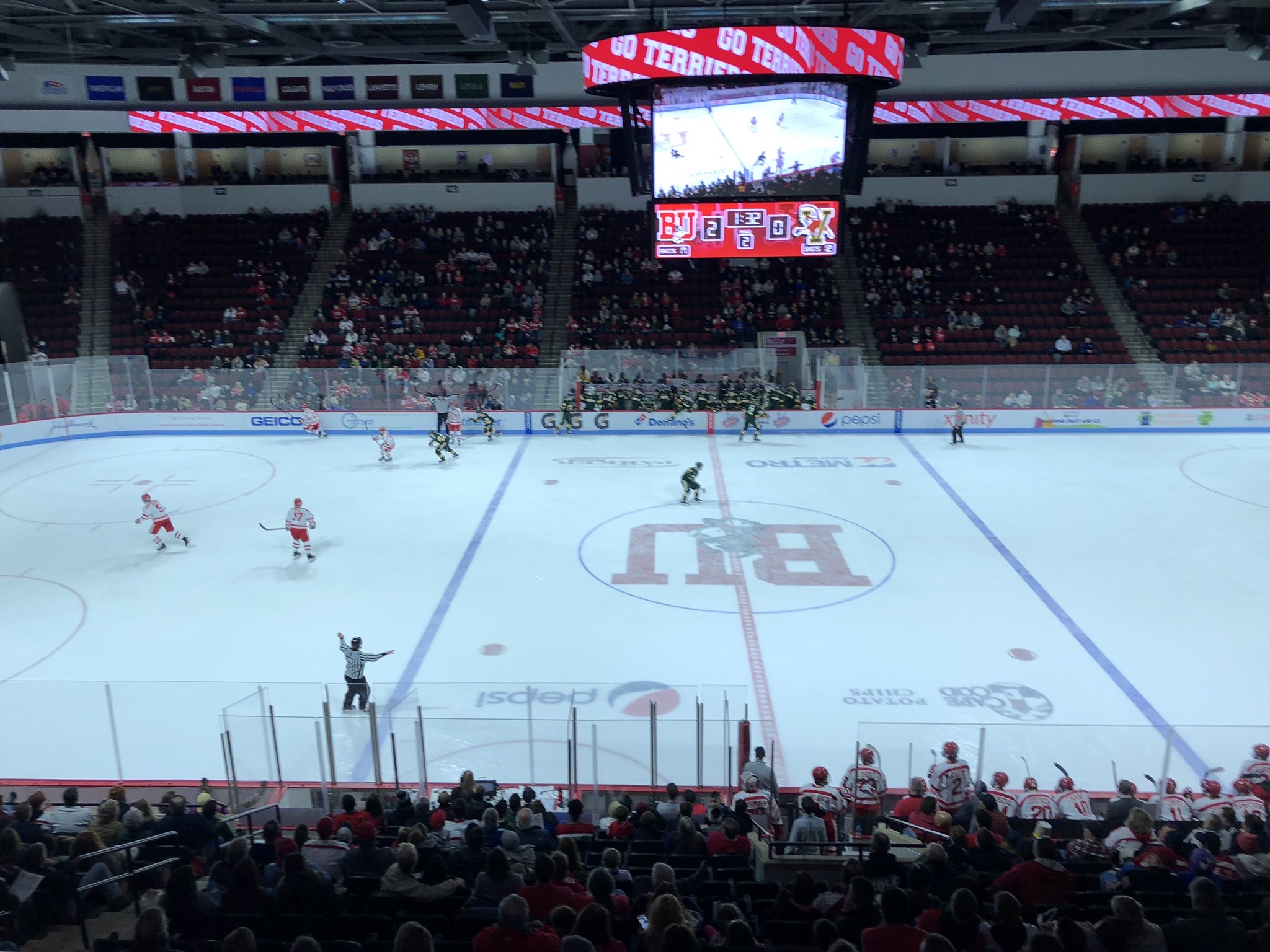 Boston University defeated No. 8/12 Northeastern University 6-3 at Agganis Arena in the battle for Boston’s “top dog” on Saturday night. The Terriers (6-6-5, 4-3-4 Hockey East) dethroned the Huskies (10-5-2, 6-4-1 Hockey East) from the top spot in the Hockey East conference standings with the win.

“They were two huge league points,” BU head coach Albie O’Connell said about the win. “I’m just happy for the guys that they put in a great effort.”

Senior first-line winger Patrick Harper, who tallied a goal and three assists against the Crimson, broke the deadlock 7:13 after puck drop to give BU an early 1-0 lead. After receiving the puck at center ice, the forward skated between both Northeastern defensemen and backhanded the puck into the top shelf to record his first goal of the game.

BU carried the lead into a high-scoring second period which saw seven goals—four within the first five minutes—scored between the crosstown rivals.

“I think they scored a couple of easy goals,” O’Connell said. “If we had better coverage, they wouldn’t have scored.”

The scoring frenzy continued a minute later as freshman winger Aidan McDonough collected his own rebound and lifted the puck past graduate netminder Sam Tucker to regain the Huskies’ lead on the power play.

“It didn’t deter them, they just kept playing,” O’Connell said about his team’s response to Northeastern’s quick start to the period. “We ended up clawing back and then going ahead.”

Despite outshooting the Terriers 40-27 overall, the Huskies failed to convert for the rest of the game courtesy Tucker’s performance between the pipes.

“We just let the brick wall take care of it,” Harper said about his goaltender.

Freshman winger Trevor Zegras dispossessed Northeastern’s Collin Murphy as he attempted to clear the zone at the 14:57 mark. The Bedford, New York native then found Harper again in the slot for the game-tying goal.

“He’s gotta be one of the best players in the country,” O’Connell said about Harper. “He’s always been a terrific player, but he’s really taken his game to another level.”

Northeastern head coach Jim Madigan expressed his frustration with the Huskies’ defense after the game, stating his players gifted BU with scoring chances.

“They didn’t really have to work hard for their goals,” Madigan said about the Terriers. “We played really bad defensively, and they took advantage of opportunities.”

Following another Northeastern defensive-zone turnover, BU freshman Robert Mastrosimone corralled a rebound and placed the puck high glove-side for a 4-3 lead with 6:10 left in the period.

Fellow freshman Domenick Fensore netted the final goal of the middle frame—his second of the season—two minutes later to give the Terriers a two-goal cushion entering the third period.

Zegras recorded his third assist of the game on Fensore’s goal, increasing his season total to 12 helpers. The freshman also came close to tallying a goal in the third period, but his shot ricocheted off the inside of the crossbar and out.

“He was electric tonight,” O’Connell said about his first-line left winger. “There’s not many guys, especially as freshmen, that are as good as him.”

Sophomore winger Matthew Quercia scored an empty-net goal to conclude the scoring with two minutes remaining in the game.

The victory marked BU’s first win over the Huskies in their last three meetings. The Terriers lead the all-time series 166-63-10.

“We don’t play a game for a long time, so we finished on a good note,” O’Connell said.

Northeastern sits in a three-way tie for second place in Hockey East with 13 points following the loss.

BU concludes the year with a non-conference matchup against Concordia University at Agganis Arena on Sunday, Dec. 29.