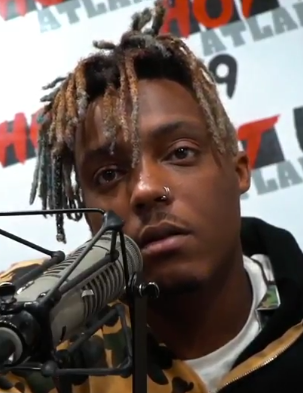 Talented young rapper, Juice Wrld, was pronounced dead Sunday morning at Chicago’s Midway International Airport. The 21-year-old, also known as Jarad Higgins, was getting off his private jet when he began to seize while walking through the airport.

Paramedics arrived on the scene shortly after two a.m. where they found Higgins suffering from cardiac arrest. Reports from TMZ claim that the Chicago native was seen taking several pills before he began seizing leading to authorities searching and confiscating multiple items including guns and drugs. Law enforcement further reported that a bottle of codeine cough syrup and 70 pounds of marijuana were seized from the jet by the FBI.

Two of Higgins security guards, Chris Long and Henry Dean, were arrested for having concealed weapons at the airport. Despite having the license to conceal and carry, this doesn’t authorize anyone, including his guards, to carry on the premise. Long and Dean were considered to be part of the rapper’s entourage and Long served as his photographer as well. Both were charged with misdemeanor gun violations due to the incident.

Many have since shared their sorrow on the devastating news including Juice’s record label, Interscope Geffen A&M Records, who reflected on what the artist had accomplished, “He was a gentle soul, whose creativity knew no bounds, an exceptional human being and artist who loved and cared for his fans above everything else. To lose someone so kind and so close to our hearts is devastating.” Juice Wrld is now among a generation of artists including Lil Peep, XXXTentacion and Mac Miller who didn’t make it out of the dark truths of success.

Juice Wrld’s cause of death has yet to be revealed. Autopsies are still being conducted at this time.