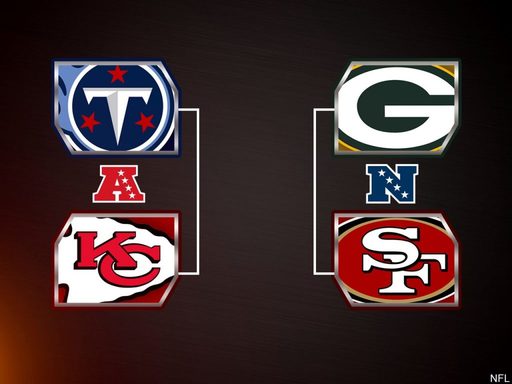 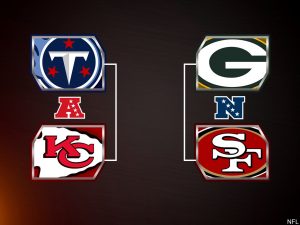 Boston, MA- Championship Weekend is set! Next Sunday the Tennessee Titans will take on the Kansas City Chiefs at Arrowhead in the AFC Championship Game while the Green Bay Packers will travel to the west coast to take on the San Francisco 49ers. Here is how we got here.

Kirk Cousins and the sixth seeded Minnesota Vikings came into this NFC Divisional Playoff off a huge overtime win against the New Orleans Saints in the Wild Card round. Meanwhile, the 49ers were looking to jump start their playoff run to Miami for Super Bowl 54.

The 49ers flexed their muscles early on 8-play, 61 yard drive to take a 7-0 lead a little over five minutes into the game.

The Vikings came back quickly when Kirk Cousins found Stephon Diggs on a 41-yard strike to tie the game at seven. That would end up being the Vikings only touchdown of the game.

Jimmy Garoppolo was solid on the afternoon throwing for 131 yards to go along with one touchdown and one interception. The Niners defense came to play, holding the Vikings to only 21 yards on the ground. The 49ers added six sacks of Cousins.

This is the 49ers first NFC Championship Game appearance since the 2013-14 season.

In the other NFC Divisional Game, Russell Wilson and the Seattle Seahawks traveled to Green Bay to take on Aaron Rodgers and the Packers.

The game was a tail of two halves. The Packers out gaining the Seahawks 201-135 in the first half while getting out to a 21-3 lead. Davante Adams scored the first Packers touchdown on a 20-yard pass from Aaron Rodgers. Aaron Jones followed that up with two rushing td’s of his own in the first half.

In the second half, the Seahawks unleashed Russell Wilson. Wilson led three touchdown drives in the second half totaling 69, 84, and 79 yards to ge the Hawks within five.

However, the Seahawks never got the ball back for a fourth time. Late in the fourth quarter, on third down, Rodgers found Jimmy Graham who got just enough for a first down. The Packers would win in 28-23.

The Packers will face the 49ers in their first NFC title game appearance since the 2014-15 season.

Derrick Henry take a bow. The Titans superstar running back has taken over the NFL postseason. Henry rushed for 195 yards in the Titans shocking win over the Baltimore Ravens en route to becoming the first player in NFL history to rush for over  170 yards in consecutive playoff games.

The Titans ambushed the one-seeded Ravens right out of the gate Saturday Night in the Charm City.  The Titans turned a Kevin Byard interception into seven after Ryan Tannehill found tight end Jonnu Smith who made a great catch in the corner of the endzone for the score.

One the ensuing Ravens drive, Tennessee stopped Lamar Jackson on a 4th&1 to take over near midfield. Titans offensive coordinator Arthur Smith dialed up a shot and it worked. Ryan Tannehill found Kalif Raymond all alone behind the Baltimore secondary for a 45-yard touchdown.

Baltimore converted two field goals late in the first half to make it 14-6. In the second half, Tennessee once again stopped the Ravens on fourth down and converted. A Derrick Henry 66-yard rush set up Henry as a passer. In the wildcat, Henry found Corey Davis in the back of the endzone to make it 21-6. Another Titans touchdown following a Jackson fumble secured the deal.

Chiefs Win Wild One at Arrowhead:

Sunday afternoons AFC Divisional Round between the Houston Texans and Kansas City Chiefs was just wild.

The Texans got out to a 24-0 at the 10:54 mark of the second quarter. Houston was helped by a plethora of Chiefs mistakes including a muffed punt inside his own 10 by Tyreke Hill, a blocked punt for a touchdown, and four drops.

However, the Chiefs were not done. It took only nine minutes for the Chiefs to get even and take the lead. Four consecutive touchdowns in the second quarter made in 28-24 Chiefs. Kansas City was aided by a questionable fake punt call by Texans coach Bill O’Brien as well as a fumbled kickoff.

The Chiefs will host the AFC Championship Game for the second time in as many years. Last year, the Chiefs lost to the New England Patriots in overtime.