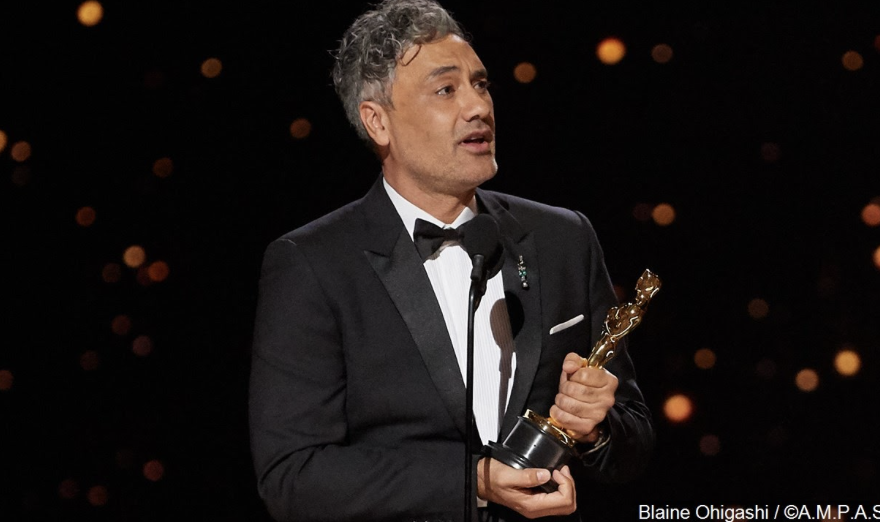 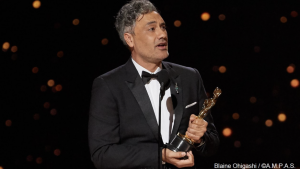 Hollywood’s biggest night was full of surprises and history making moments! The 92nd Academy Awards closed out awards season with many well-deserved trophies, emotional speeches and of course, lots of ionic reactions. Here are some of our favorite moments:

The ceremony began with a musical number from Janelle Monáe who celebrated all the films this year (including colorful costumes from Midsommar, Us, and A Beautiful Day in the Neighborhood.. All of which were not nominated). She especially gave a shout out to the women directors who were snubbed by the Academy this year.

The first award of the night for Best Supporting Actor went to Brad Pitt in Once Upon A Time in Hollywood. Pitt, who portrayed stuntman Cliff Booth, scored his first acting Oscar (he previously won for producing 12 Years a Slave). In his speech he gave a shout out to his co star, Leonardo DiCaprio saying, “Leo, I’ll ride on your coattails any day, man. The view is fantastic.”

Laura Dern took home her first Oscar for Best Supporting Actress for her role in Marriage Story. While Dern has been sweeping up awards all season long, her speech was genuine as ever, thanking her parents, calling them her heros and her legends.

One of the funniest moments of the nights occured when Maya Rudolph and Kristen Wiig presented the awards for Best Costume Design. The two came on stage completely serious, very uncharacteristic of the comedic duo. They soon went on to break character, saying they were “acting” and auditioning for any present directors in the room. They also belted out into song to present Best Production Design showing everyone that they can truly do it all.

The musical performances stole the show with appearances from Idina Menzel, Chrissy Metz, Randy Newman, Cynthia Erivo and… Eminem? The rapper made a surprise appearance performing, “Lose Yourself” which won Best Original Song back in 2003. Eminem actually didn’t attend the award show that year because he didn’t think he would win. Following the performance he tweeted, “Look, if you had another shot, another opportunity… Thanks for having me @TheAcademy. Sorry it took me 18 years to get here.”

The biggest surprises of the night came from the South Korean film, Parasite. The fan favorite took home four awards: Best Screenplay, Best International Film, Best Director, and Best Picture. While members of “film twitter” were rooting for the movie, fans were skeptical that it wouldn’t win because of past #OscarsSoWhite controversies. However, the movie made history becoming the first film in a foreign language to win Best Picture.

History was also made when Taika Waititi won the Oscar for Best Adapted Screenplay for Jojo Rabbit. Waititi became the first person of Maori descent to win an Oscar; he dedicated the award to “all the indigenious kids in the world who want to do art.” Hildur Gudnadóttir became the first woman to win Best Original Score and Eimear Noone became the first female to conduct at the Oscars.

Rounding out the night, Renee Zellweger and Joaquin Phoenix took home statues for Best Actor and Actress. Phoenix used his speech to talk about injustice and inequality. He ended it by quoting his late brother River Phoenix saying, “When he was 17, my brother wrote this lyric, he said, ‘Run to the rescue with love and peace will follow.’”

Performance by an actor in a leading role: Joaquin Phoenix in JOKER

Performance by an actor in a supporting role: Brad Pitt in ONCE UPON A TIME…IN HOLLYWOOD

Performance by an actress in a leading role: Renée Zellweger in JUDY

Performance by an actress in a supporting role: Laura Dern in MARRIAGE STORY]

Best documentary short subject: LEARNING TO SKATEBOARD IN A WARZONE (IF YOU’RE A GIRL)