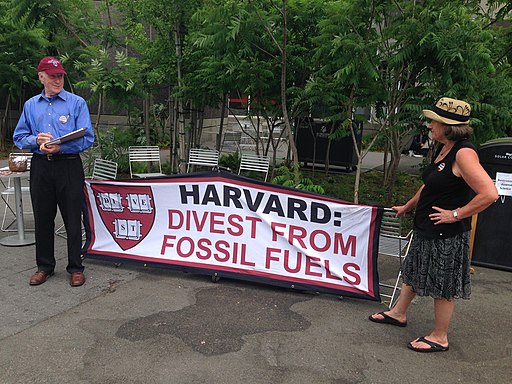 Harvard University, which has the world’s largest education endowment of $41 billion, has an undisclosed amount invested in oil, gas, and coal companies.  These companies included those that drill and extract fossil fuels. Harvard’s students have responded that they have had enough.

In May 2014, an undergraduate a part of the divestment campaign was arrested for blocking President Faust and members of the administration from their offices. Last fall, students delayed the incredibly popular Harvard-Yale football game at halftime in protest. The University’s popular theatrical troupe Hasty Pudding made quips about the oil investments in their 2020 show. The investments are a well-known and well-fought cause around the campus for years; however, no change has occurred.

Lawrence Bacow, the university’s current president, wrote in the Harvard Gazette that with these investments they are “engaging with industry to confront the challenge of climate change is ultimately a sounder and more effective approach for our university.”

However, Divest Harvard, a Harvard University student-run organization, disagrees. Divest Harvard’s website said, “If Harvard divests, we show the country and world that we refuse to be complicit in this industry’s continued war on human and environmental health.” They have also pointed out three steps Harvard needs to take; disclose the amount invested in oil, gas, and coal companies, divest to condemn the fossil fuel industry, and to reinvest in a sustainable and community-based project.

This is not the only time Harvard has had controversial investments vehemently opposed by students. In the mid 1980’s, after years of lobbying and protests, Harvard in some measure divested in companies that participated and supported in the industrialization of arthapeid South Africa.

According to a study examining the impact of divestment by Roger Williams University, if huge investment powers like Harvard pulled out of these companies, it would cause fossil fuel funds to stigmatize and organizations to restructure.

The university has made an outspoken goal of making the campus fossil-fuel free by 2050, but for students, it’s not enough.

“We only get one Earth.” Divest Harvard wrote, “ It’s up to us to protect our planet and all of its inhabitants from the damaging effects of the fossil fuel industry, a chief perpetrator of climate change, by pushing for divestment.”