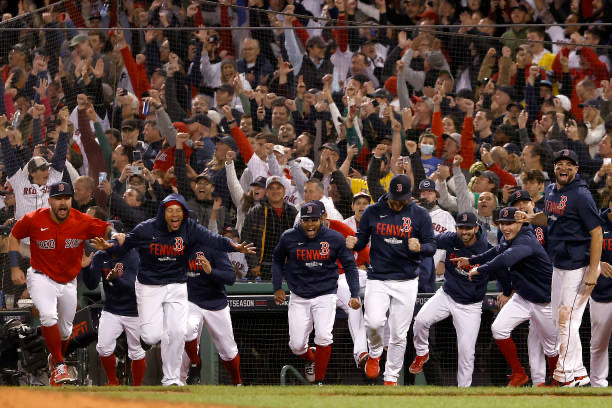 The Boston Red Sox are moving on to the American League Divisional Series and will face the American League East Champions, Tampa Bay Rays in a best of five series starting tomorrow night after defeating the New York Yankees 6-2 in the Wild Card game.

Boston scored two in the first from a 2-run bomb by shortstop Xander Bogaerts. In the third inning, lefty power-hitting DH Kyle Schwarber blasted a solo home run, followed by Enrique Hernandez with a single, and Rafael Devers walking prompting a pitching change. Before being pulled, during those first three innings, chants of “Gerrrrriiiittt, Gerrriiittttt, Gerrriiiiiitttt” shook the stadium. The $324,000,000 “ace” let up four hits, two walks, two home runs.

New York’s offense struggled severely, recording only two hits through the first five innings. In the sixth, Anthony Rizzo hit a home run that barely wrapped around the iconic Pesky Pole in right field making it a 3-1 game. Next up came big Aaron Judge who recorded a single. With one out, in came Ryan Brasier to replace Nathan Eovaldi who played a fabulous game going 5.1 innings allowing only four hits, one run, and striking out eight.

With a 2-1 count on Stanton, he blasted what fully seemed to be a towering home run. Well, what would be a home run in any other park in the league, was stopped by the Green Monster in left field. The Yankees third base coach sent Aaron Judge home with one out, resulting in him being thrown out at the plate on a gorgeous 8-6-2 relay sending the Fenway faithful into a frenzy.

Boston would go on the record three more runs through the next few innings, two of them courtesy to center fielder Alex Verdugo. New York tallied one more in the ninth courtesy of a Giancarlo Stanton homer. The final out came on a 1-0 count to Gleyber Torres who popped out to right fielder Hunter Renfroe, sealing the deal, and sending New York packing.

Ever since New York Yankees’ right fielder Aaron Judge played “New York” by Frank Sinatra at Fenway Back in 2018 after game two of the ALDS, Boston has now outscored the Yankees 26-6 in postseason games.