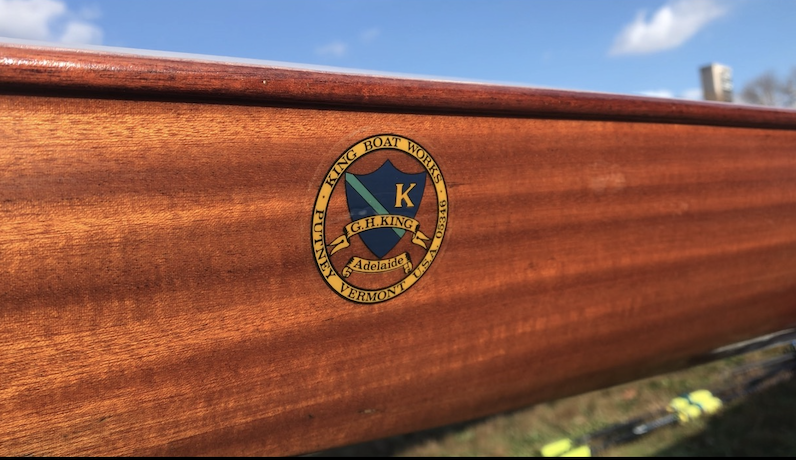 By Karagan Knowles and Ashly Ibarra

Amongst the crowds of cheering fans and rowing participants at this year’s Head of The Charles Rowing Regatta, Kathryn Bertine stood above Weeks Bridge yelling as loud as she could as number 45 passed by in the river below.

Number 45 was 67-year-old Diana Hanks, racing in the Women’s Grand Master/Veteran Singles fleet and rowing in “The King” – the same boat Kathryn’s father had raced in the Head of Charles numerous times before.

“My dad was an avid rower during the 1990s and the 2000s and he came to the Head of The Charles at least five times,” said Bertine. “That’s how many times I have been able to look up his results, at least since they started keeping results online. Could be even more than five times. Head of the Charles was a very special place for him.”

As Kathryn fixed her ‘Head of The Charles’ emblem hat and raised her neon sign above the bridge, we asked the question: “What brings you here today?”

The answer we received was more than just support of a race she had come to love watching, but to support a new rower in general. Diana Hanks now rows in the same boat that Kathryn’s father used so many times before and honors him while she does.

“I came to the Head of the Charles today because my father passed away about 18 months ago,” Bertine said. “A beautiful woman named Diana is now in possession of my dad’s boat and some of his ashes are actually in the hull of the boat. I knew my dad would be really proud that his boat is racing here with such a wonderful person, and I wanted to cheer them both on.”

‘The King’ is what Peter Bertine, Kathryn’s late father, called his boat. The Graeme King brand is a rare find, as only an estimate of 400 were made.

“I knew his boat needed to go to somebody who is also a rower and a racer. He called it The King, so I knew we needed to find someone who knew what that meant. Through a friend on social media, I met Diana and the rest is history. Human connection and communication brought us here,” said Bertine.

When Diana Hanks qualified for The Head of The Charles, the news that ‘The King’ would once again race in the Charles was enough for Kathryn to fly from her home in Tucson, Arizona to show her support.

“When I heard I got in I was so excited,” Hanks said. “I was like wow, I’m going to race ‘The King’ at the Head of the Charles.”

Since acquiring The King,  Diana has referred to Peter as “the invisible Coxswain” that helps guide her. After completing The Head of The Charles, she said that statement rang true.

“I definitely felt there were times where Peter jumped in and got me to look over my shoulder at the right time,” Hanks said. “Sometimes I’ll get this in the groove and everything the instructor tells me to do happens, and I’m like I don’t row like that. Must be Peter looking out for me. I felt a little bit of that today.”

Even though Diana went on to say that she felt she could have performed better during this particular race, it’s a fact that [Queen] Diana and ‘The King’ will have more opportunities in the water to make up for it.

For the first race for Diana and ‘The King’ at the event that Peter Bertine valued, this race will not soon be forgotten.