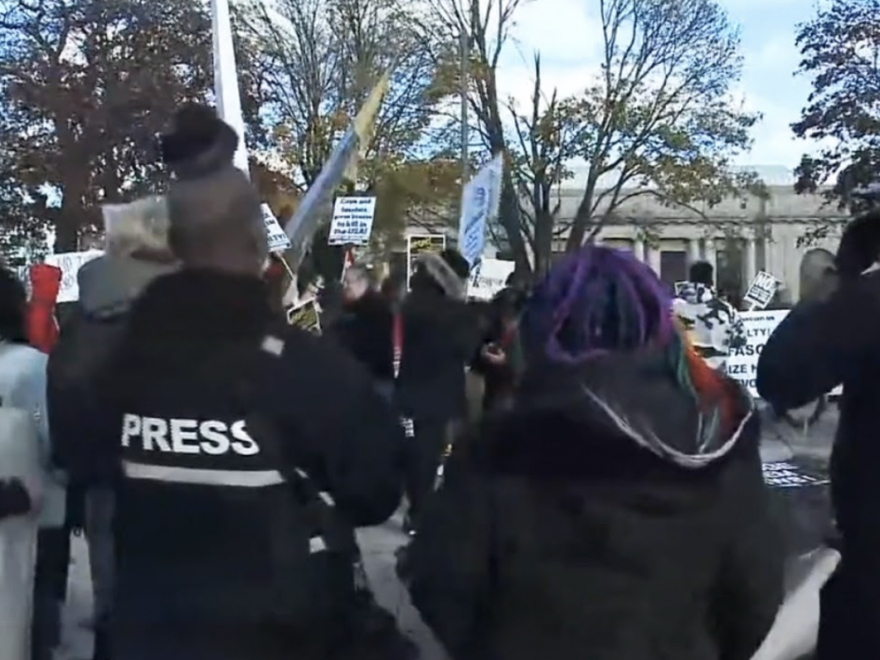 Kenosha, Wis.– People have responded to the acquittal of Kyle Rittenhouse all across the country, but in Kenosha, protesters took it a step further by gathering to retrace his route on that fatal summer night of 2020.

On August 25, 2020, Rittenhouse, a white male, then aged 17 years old, shot and killed two men, Joseph Rosenbaum and Anthony Huber, and injured another, Gaige Grosskreutz, all of whom were unarmed. Rittenhouse carried an AR-15-style semi-automatic weapon into a crowd of protesters who took the streets in response to the police shooting of Jacob Blake. Rittenhouse claimed he was there to protect property and businesses, but said he came under attack and shot the victims in self-defense. Thomas Binger, the prosecution lawyer on the case, argued that “You can’t claim self-defense against a danger that you create.”

Activists used a number of tactics to express their frustration with the verdict and the injustices within the criminal justice system. They used signage displaying phrases such as “THE WHOLE SYSTEM IS GUILTY,” referring to the verdict as a fault of the American criminal justice system for upholding white supremacy. One sign also read “Anthony and Jojo,” paying tribute to the deceased. Many also held long weapons to resemble the gun that Rittenhouse used in the encounter last year.

Bishop Grant, the National Field Director for the Rainbow PUSH Coalition attended a protest in Chicago earlier in the week but was unable to make the event in Kenosha. He issued a statement saying that “The verdict of not guilty is very revealing of the state of criminal justice in America,”

NAACP President and CEO, Derrick Johnson said on Sunday that Rittenhouse “put himself in harm’s way based on rhetoric he’s seen on social media platforms.” He described the verdict as a “warning shot that vigilante justice is allowed in this country or in particular communities.”