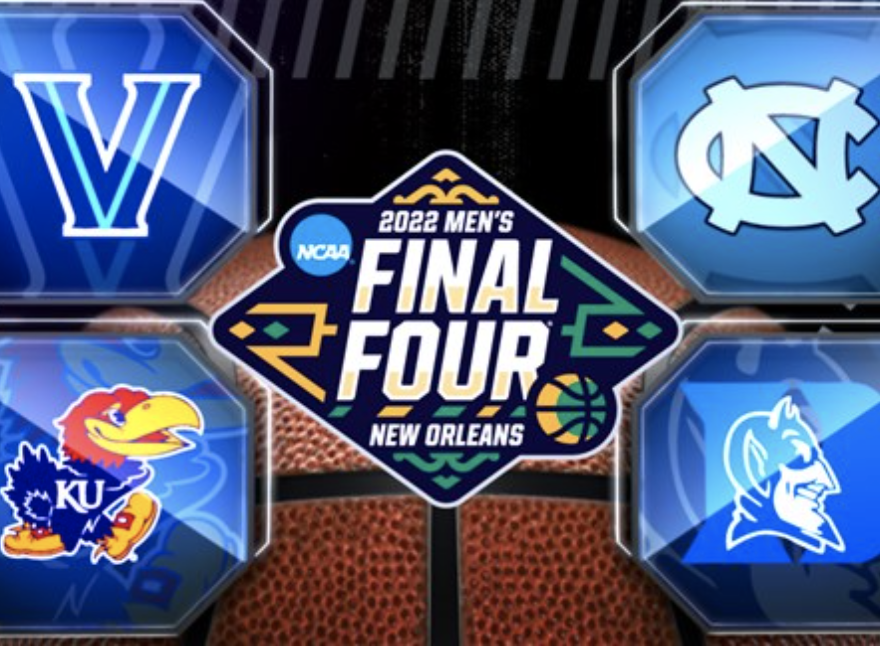 This year’s Final Four hosts four extremely talented and prestigious teams in the men’s college basketball landscape. Fans get to see the only number one seed remaining in the tournament in Kansas, and 2018’s National Championship winner in Villanova, face off with a shot at the finals on the line. In our other matchup, we have arch rivals Duke and UNC square off in what could be Coach Krzyzewski’s final game. So who has the edge? Well, let’s preview both games airing this weekend.

Villanova looks to get closer to winning its first national title since their 2018 win against Kansas this Saturday. Villanova knocked off Houston, a team that appeared in last year’s Final Four, by a score of 63-55 in the Elite Eight. They’ve had a tough road getting through the tournament before Houston as well, having to face Michigan, Ohio State, and Delaware. Kansas, on the other hand, has had extremely high expectations throughout the tournament, with viewers just waiting for the number one seed to drop, but it hasn’t happened yet. The Jayhawks are the lone number one seed left and have looked good all throughout, beating Texas Southern, Creighton, Providence, and Miami to get to this point. The Jayhawks are in search of their first title in over ten years, with their last win coming in 2008. Kansas brings along debatably the best defense left in the tournament and is coming off arguably their best performance of the entire season thus far, overcoming a 35-29 deficit against Miami in the Elite Eight to win the game 76-50. On the other hand, Villanova thrives off experience. Being the winners of the 2018 tournament, they still have players on their roster from that championship season, one of which is Wildcats senior point guard Collin Gillespie. Better yet, that same year, Villanova beat Kansas in the Final Four in what would lead to the Wildcats winning it all. Kansas is favored by 4.5 on the spread, but this is really anyone’s game for the taking.

Two schools that have feuded for years meet once again in this year’s Final Four. There are plenty of storylines entering this game. First off, UNC is the lowest seed remaining in the tournament, being an eight seed, and had no expectations at all towards the start of the year to have even made it this far, let alone win the tournament. Things turned around for the Tar Heels in their meeting with Duke earlier in the season. In what was Coach K’s final home game, UNC faced off against Duke for a classic rivalry game, a perfect way to send Coach K off. Unfortunately for him, the Tar Heels spoiled his home finale with a dominant offensive win over the Blue Devils, winning 94-81, sending Duke fans home unhappy. This marked the official solidification that North Carolina’s season had truly turned around after a pretty horrific start, as they entered the tournament rattling off wins against Marquette, number one seed Baylor, number four seed UCLA, and the Cinderella of this year’s tournament, Saint Peters. Duke, on the other hand, is on a quest to enact revenge on the Tar Heels and grant Coach K a retirement worthy of his reputation by capping his career off with another finals appearance and hopefully a championship. Duke hasn’t had an easy road through the tournament either, after facing adversity following the stunning loss to UNC right before Selection Sunday. Duke entered the tournament and knocked out CSUF, Michigan State, Texas Tech, and Arkansas. These two teams both bring dynamic offenses to a game in what should be a shootout between two hated rivals.

You can check out both of these games this Saturday, April 2, with Kansas and Villanova tipping off at 6:09 p.m. and UNC and Duke at 8:49 p.m.