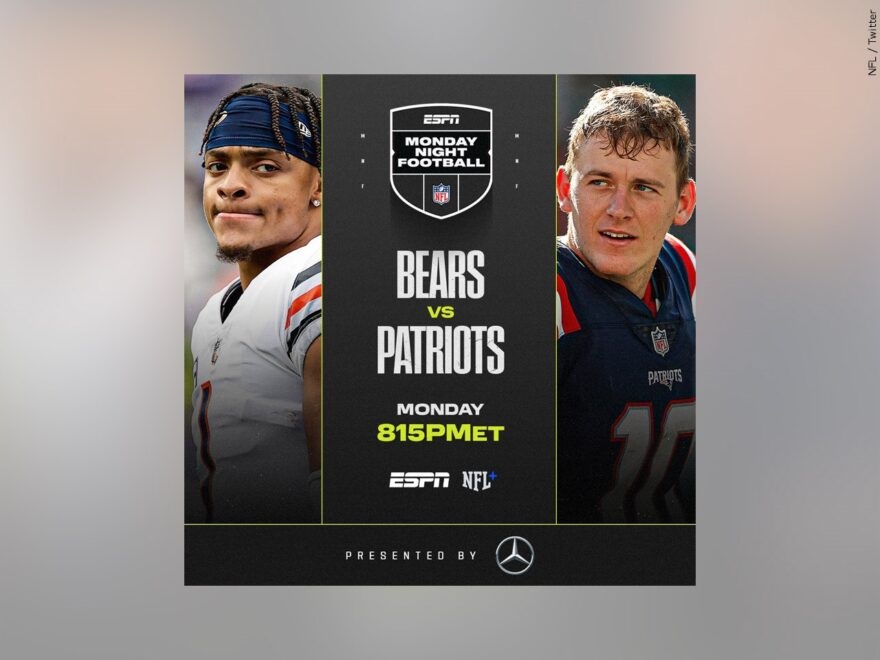 BOSTON – The New England Patriots lost badly, 33-14, in prime time against the Chicago Bears. The Pats saw Mac Jones return to action after missing the past three games with a high ankle sprain. While Jones looked to be moving well, he struggled to get the offense going. On his third drive, he threw an ugly interception to Bears cornerback Jaquan Brisker on what would be his final snap of the evening.

Rookie quarterback and starter of the previous two games, Bailey Zappe, would enter the game with the Patriots down 10-0. Zappe was able to energize the Pats offense by throwing an electric touchdown pass to Jakobi Meyers. Zappe did it again on his next drive with a great ball to Devante Parker to set up New England in the red zone to score and take the lead 14-10.

Despite the impressive turnaround, things would quickly deteriorate for New England. The Bears put up 23 straight points and held the Pats scoreless for the rest of the game. To add insult to injury, Chicago’s defense was able to pick off Zappe twice, stunting Bill Belichick’s chance at passing George Halas for second place on the head coach’s all-time wins list.

Besides losing a pivotal game to drop to 3-4 on the year amongst an extremely tight divisional race, questions now surround the Patriots quarterback situation. In what looked like great circumstances, featuring two starting caliber QB’s on the same roster turned sour quickly.

While Mac Jones’ decision making on the interception play was bad, the distinct drop off in quality of play calling when Mac was in the game was worse. Whether it’s the stubbornness of this new offensive coaching staff refusing to adapt their scheme to Mac’s style of play or the communication just not lining up, it’s unsure.

However, it is certain that the plays called when Jones was in the game were detrimental. A run play on 3rd and 10 and a lack of utilization of running backs in the passing game, other than a few poorly designed plays, led to two of three drives going three and out. That, mixed with the fact that the crowd at Gillette Stadium turned on Jones and this bore of an offense he was leading, chanting for Zappe after every failed drive, ended Mac’s night on a sour note as he was benched for the remainder of the game.

Coach Belichick insisted post-game that he would’ve put Jones back in if it weren’t for the score getting out of hand and denied that the timing of his benching was associated with the interception. His statements this morning made some question his comments ‘supporting’ Mac last night, providing the monotone answer of “we’ll evaluate the situation” when asked if there would be a quarterback competition this week.

When the crowd saw Bailey Zappe, he didn’t disappoint, picking up right where he left off last week against Cleveland. While Zappe looked good, the play calling was also much better; featuring wheel routes by Stevenson that would either end in a big gain or draw a defender to open something else up. The spark provided by the home crowd to the Pats faded fast however as New England’s offense stalled at 14 points. The more time Zappe played in this one, the worse he looked. Incompletions piled up and so did interceptions for the rookie, putting the starting spot that seemed to be all his after replacing Mac mid-game back out for grabs.

A classy, yet frustrated, Mac Jones was seen in the Pats post-game conference— he will try and take his spot back this week. While both QBs and other Patriots players remained stoic when presented with questions, we saw a crack of emotion from Meyers who explained that “it’s tough to see somebody who worked so hard get that kind of treatment,” when asked about Mac Jones being taken out of the game so quickly. New England hopes to get back on track mentally before next Sunday’s must-win game against the New York Jets, kickoff is at 1 p.m. EST.