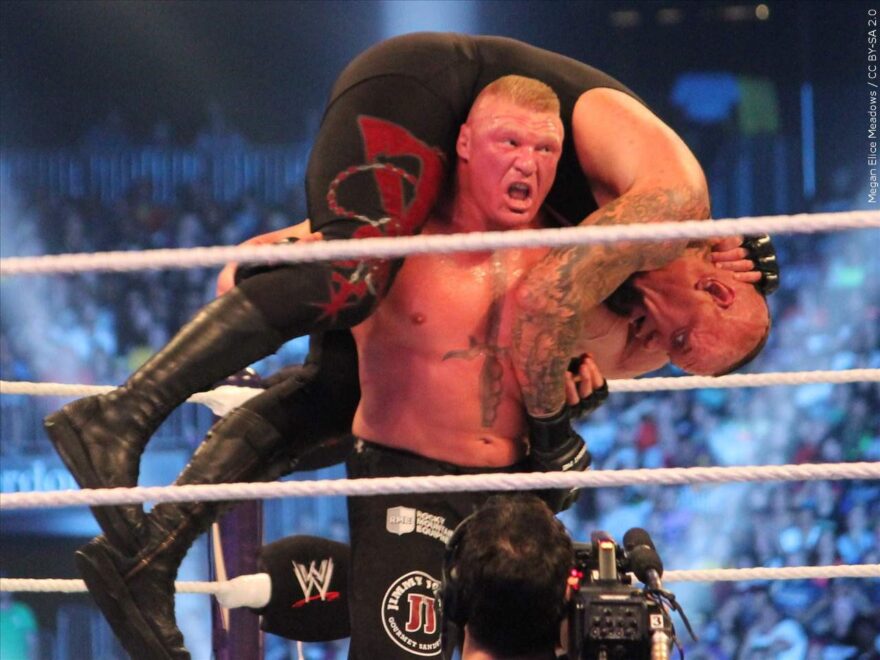 We’re a week removed from AEW reverting back to their regularly scheduled Wednesday Night time slot for AEW Dynamite. This week AEW went live from the Chesapeake Arena in Baltimore, Maryland. Being just two weeks out from the highly anticipated AEW PPV Full Gear, Tony Khan put together another stacked card from top to bottom.

The show was headlined by The Machine Brain Cage taking on Samoa Joe for the ROH World TV Championship. Other title matches advertised for the show were AEW All-Atlantic Champion Orange Cassidy putting his title up for grabs in a three-way match against Luchasaurus and one-third of the World Trios Champions, Rey Fenix, as well as, 40-0 TBS Champion Jade Cargill defending her championship versus Marina Shafir.

AEW World Champion Jon Moxley took on The Firms’ brightest young star, Lee Moriarty in an AEW World Championship eliminator match. But all the talk was on Ring of Honor World Champion, The Ocho Chris Jericho defending against any former ROH Champion who thinks they could step up to the plate. With Full Gear right around the corner, there sure was a lot happening on this show. Let’s break down the November 2nd edition of AEW Dynamite.

The show kicked off with Darby Allin taking on Jay Lethal. After weeks of animosity between the two, this rivalry finally saw its second bout of the feud. Darby, who had been attacked by Lethal the week before by having a garage door repeatedly slammed on his ribs, showed up to Dynamite with his entire torso wrapped in tape.

These two didn’t waste time beating the snot out of each other. The match started off hot. Lethal continues to look incredible late in his career and it’s fantastic to see him on TV every week. Lethal, who had previously lost to Darby Allin on Dynamite a number of months ago, looked to put him away early. Through the halfway point of the match, Sonjay Dutt and Satnam Singh made their way to the ring to do what they do best, help Jay Lethal win.

Darby hit Singh with a Tope Suicida, which made for a very cool spot and a great reaction from the live crowd as Darby bounced right off of Singh. Moments later, referee Bryce Remsburg ejected Dutt and Singh from ringside. Just as Darby was gaining momentum, a wild Sting appeared in the ring and attacked Darby. Or so we thought. It was later revealed that the man behind the Sting get-up was none other than Cole Karter? Yep, Cole Karter of the Factory repeatedly beat Darby with a baseball bat which led the way for Jay Lethal to finish off Darby with a Lethal Injection to score the win.

After the match, Darby continues to be attacked by Lethal and company before the stinger’s music hits. It was great to see Lethal look to the rafters of the building to try and spot Sting’s arrival as we have seen him appear from the craziest of places over the course of his career. However, the music stops, and out of nowhere, Jeff Jarrett takes an acoustic guitar to Darby Allin’s head before cutting an incredible promo on why he’s in AEW and what he intends to do while he’s here.

The Baltimore audience erupted in boos as Jarrett never fails to draw an immense amount of heel heat. This was more than random but should lead to a fun Tag match between Jay Lethal and Jeff Jarrett (who have tagged before) taking on Darby Allin and a returning Sting.

After being laid out by The Firm last week, AEW World Champion Jon Moxley looked for retribution against one of the brightest young talents in Professional Wrestling today, Lee Moriarty. Moxley and Moriarty put on a technical professional wrestling clinic in this one. Moxley made it clear early on that he can adapt and wrestle almost any style of pro wrestling but Taigastyle Lee Moriarty is the more gifted technical wrestler.

Controlling much of the match, Moriarty displayed his incredible athleticism and mat grappling abilities which allowed him to shine in this bout. However, Moxley is the harder-hitting competitor. He’s the leader of the Blackpool Combat Club for a reason. Late in the match, Moxley was able to apply a sleeper hold headlock to submit Moriarty for the victory. Although Moriarty never had a genuine shot at winning this match, he was still able to stand out and hang with one of the best in the business today.

Following the match, Ethan Page, who had been on commentary for this contest, ran down to the ring and attacked Jon Moxley with the help of Moriarty and Stokely Hathaway. After Lee Moriarty was the first from The Firm to step to Jon Moxley, it looks like Ethan Page is the next in line for a date with the champion ahead of Full Gear.

As of late, AEW has been heavily showcasing ROH and its talent with at least one ROH matchup on the last 6 episodes of Dynamite. This week, we were treated to an outstanding bout between the ROH World Champion Chris Jericho defending in an open challenge against the returning Colt Cabana. It was being discussed all week as to which former ROH champion would answer the open challenge but nobody thought Colt Cabana was going to walk through the curtain.

Cabana, who was rumored to have been moved to the ROH roster following CM Punks’ arrival in AEW, hadn’t been seen on Dynamite since November 24th, 2021. Jericho and Cabana didn’t disappoint at all in what many would call a solid rematch. Colt Cabana had the crowd on his side throughout the duration of this match. Displaying great athleticism and agility, Cabana showed outstanding offense by hitting Jericho with a springboard moonsault onto the ground outside. At 51 years of age, Jericho can still hang with the best of them.

Chris Jericho continues to tell phenomenal stories in his matches and this was no different. Jericho put Cabana away with the codebreaker to retain the title. Following the match, The Blackpool Combat Club’s Claudio Castagnoli and Bryan Danielson attacked Chris Jericho and the J.A.S. from behind on the ramp.

This made it clear that the rivalry between the J.A.S. and The Blackpool Combat Club is far from over. It was later announced that Chris Jericho will be defending the ROH World Championship in a four-way match at Full Gear against Sammy Guevara, Claudio Castagnoli, and Bryan Danielson. It should be quite interesting to see the outcome of this bout but regardless this should be the end of this feud.

When this match was announced, Orange Cassidy was minutes removed from his first title defense as AEW All-Atlantic Champion. This week he put the championship on the line yet again in a three-way match against Luchasaurus and one-third of the World Trios Champions, Rey Fenix. This was a highly contested clash of styles between these three immensely talented wrestlers. Luchasaurus continues to be a dominant threat to the AEW roster.

During the match, Jungle Boy made his return to TV and cross-bodied Luchasaurus off the stage onto a pile of tables which made for a really cool spot and return for Jack Perry. Rey Fenix is without a doubt one of, if not the best high-flyer in the industry. Putting on banger after banger every time he steps in the squared circle. Orange Cassidy proved yet again why he is a mainstay here in AEW and that he could work with virtually anyone in the industry.

This match was incredible from start to finish with Orange Cassidy retaining the championship and getting his All-Atlantic City Dream Match on Rampage. Moments after the bell rang, Cassidy stood in the center of the ring awaiting his opponent for Rampage to arrive. Suddenly, music hits, and New Japan Pro-Wrestling’s Katsuyori Shibata who was last seen in AEW at Forbidden Door this past June, arrives. It was a treat for the fans and will definitely be an All-Atlantic City Dream Match classic when these two collide for the championship on Rampage.

Jade Cargill has beaten everybody in her path since her debut in AEW. Having already pinned her opponent this past Wednesday, Marina Shafir once before, this match felt too predictable. Weeks ago on Dynamite, Nyla Rose stole the TBS Championship from Jade Cargill and since then has been playing mind games and avoiding Cargill. In turn, The Native Beast sent Marina Shafir to do her work for her and challenge Cargill for the title.

There’s no denying Cargills talent especially this early in her young career, however, this match felt stale. Cargill made quick work of Shafir which led to a tremendously aggravating promo from Vickie Guerrero and Nyla Rose.Being that this was the only women’s match on the show, fans had much to be disappointed about. A consistent problem of AEWs is giving the women on the roster their time to shine.

Wednesday was no different as everything from the time slot, to the match, to the segment afterward felt off. We can be sure to see Nyla Rose take on Jade Cargill for the TBS Championship sooner rather than later, with that match presumably taking place at Full Gear.

The show closed with the ROH TV Champion Samoa Joe successfully defending the title against The Machine Brian Cage. This was a high-quality hard-hitting affair. Who wouldn’t want to see these two behemoths lock up? Both men looked strong throughout the entire matchup. It never gets old watching a man of Brian Cage’s size doing the things he does in the ring. It is simply remarkable and gives something the fans can Marvel at.

Samoa Joe has been a commanding ROH TV champion to this point and that doesn’t seem to be changing anytime soon. Samoa Joe was able to put Brian Cage with the Coquina Clutch to score the submission win.With ROH Final Battle coming up following AEWs Full Gear Samoa Joe is surely primed to have a new challenger for the pay-per-view.

Tony Khan has been heavily utilizing the ROH Roster and Championships to familiarize the AEW audience. It will be interesting to see what lies ahead for The Embassy and Brian Cage as Final Battle gets closer. Considering Ring of Honor will be getting a TV deal soon, Final Battle should be a dandy.

The November 2nd episode of AEW Dynamite was a good show throughout. Just two weeks away from Full Gear, AEW heads to Boston for what should be an electric card for an electric crowd. As next week rolls on, the Full Gear card will start to take shape. The direction of the company remains exciting with much to look forward to as a fan of Professional Wrestling.