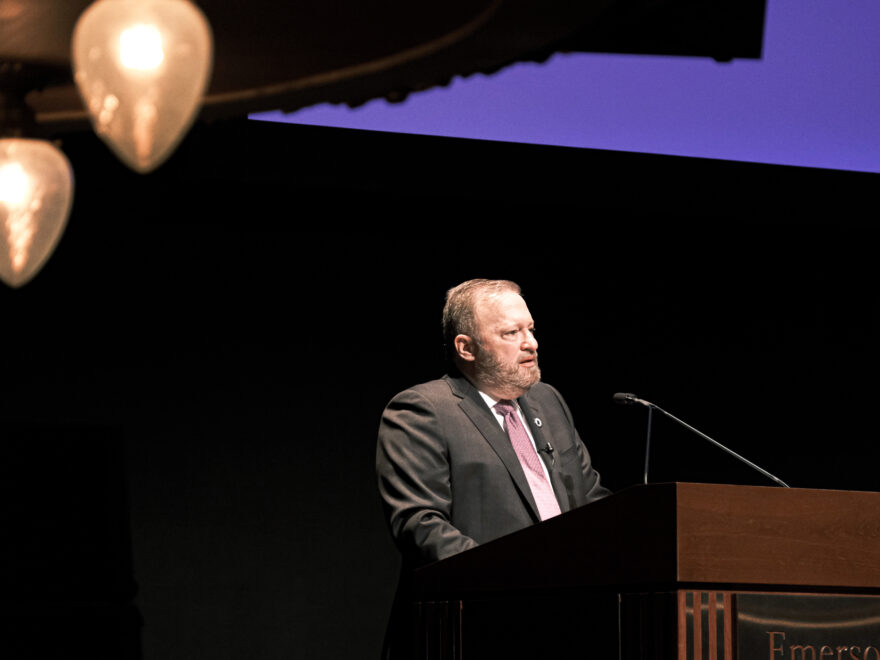 Emerson College introduced its 13th president Wednesday after over a year and a half of searching for the right candidate to fill the position. Future President Jay Bernhardt took the stage and spoke in-depth about how he shares Emerson’s “priorities and values.”

With a background in health communication, he believes in the power of the media and the arts to make a difference in society. Bernhardt accredits his love for education to his immigrant grandfather who owned a general store in New Jersey. “I sincerely and deeply believe that higher education has the power to expand minds.”

Bernhardt’s speech focused on his excitement about becoming Emerson’s next president in just 127 days; he sees it as a “new beginning,” adding, “Emerson is an extraordinary place with fantastic people.” Also, to the crowd’s joy, he referenced Taylor Swift– whose favorite number is thirteen (Bernhardt will be Emerson’s 13th president)– and Jennifer Coolidge, an Emerson alum who recently won a Golden Globe award.

Gregory Payne, the Chair of Communication Studies at Emerson, said he appreciates the President-Elect’s commitment to communication and simultaneous appreciation for the arts. “I think he’s got a very important ability to build bridges, not only within the college.”

Al Jaffe, a member of the Board of Trustees, showed relief over the committee finally choosing a candidate, especially one like Bernhardt. “He’s the right guy at the right time.”

Jolie Mitchell-Germain, a BCE student set to graduate in May, says she is “trying not to be skeptical” about his commitment to social justice. She aims to see more “core diversity” among the student body and hopes his speech’s focus on equity was not just empty words.

Bernhardt’s celebration began with a sentimental video montage of the school’s history and a reflection from Interim President Bill Gilligan. The chair of the Presidential Search Committee and the president of the class of 1978, Eric Alexander, delivered a heartfelt goodbye to Gilligan and welcomed Bernhardt into the role. Alexander cited Bernhardt’s successful history working with colleges, commitment to social justice, and passion for Emerson’s mission as reasons for his selection. Irka Perez, class of 2023, recapped Bernhardt’s extensive professional history for the audience before welcoming him to the podium. “As a student member of the Presidential Search Committee, I’m excited to see Dr. Jay Bernhardt as the future of Emerson.”